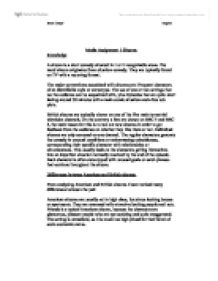 Differences between American and British sitcoms

Media Assignment 1 Sitcoms Knowledge A sitcom is a short comedy situated in 1 or 2 recognizable areas. The word sitcom originates from situation comedy. They are typically found on TV with a recurring format. The major conventions associated with sitcoms are: Frequent characters of an identifiable style or stereotype. The use of one or two settings that we the audience can be acquainted with, plus Episodes that are quite short lasting around 30 minutes with a main comic situation and a few sub plots. British sitcoms are typically shown on one of the five main terrestrial television channels. On the contrary a few are shown on BBC 3 and BBC 4, the main reason for this is to test out new sitcoms in order to get feedback from the audience on whether they like them or not. Individual sitcoms are only screened on one channel. The regular characters generate the comedy in unusual conditions or embarrassing coincidences, corresponding their specific character with relationships or circumstances. This usually leads to the characters getting themselves into an imperfect situation normally resolved by the end of the episode. ...read more.

Practical Task - Creating your own British sitcom. Synopsis for Whistle while you work. Whistle while you work is based around four main characters, three males named Daz, Bob and Dave and one female called Barbarella. The main setting is a local public house; however small selections of the screenings are set on a football field. Daz the young, outgoing sports enthusiast, Bob the eccentric nerd and Dave the noble entrepreneur all have one task and that is to impress the stunning barmaid Barbarella. Barbarella is vivacious, and is very supportive towards all three gentlemen; nevertheless a relationship with any of the men is not on her agenda. The comedy is generated from the fiasco caused by the three men, when attempting to impress Barbarella. Bob's irrelevant comments, and unsystematic outbursts contribute to the comedy. Also the over competitive dispute between the three men convey pleasure to the audience. Evaluation In my practical task I set out to achieve an incomparable idea for a potentially admired sitcom. It is about an attractive barmaid and 3 men that are central around a pub. ...read more.

Consequently it will be viewed extensively, because there are no similar programs shown to compete with it. These are the actors I have in mind to play the main characters roles in my sitcom. I think Zoe Lucker should play the barmaid Barbarella due to the fact that she is pretty, she has blond hair and her cunning acting skills will make Barbarella irresistible to the male charm. The public will recognise her from footballer's wives. I think Jason from Coronation street should play Daz the trendy sports fanatic, because he looks like he is quite a fit person and he will be able act Daz's roll of slick talking and smooth moving. I have Matt Lucas in mind to play Bob the nerd, as his ability to take on lots of different roles in Little Britain shows you that he would do a great job of adapting this character and keep the audience amused throughout. I would like Will Smith to play Dave as his witty acting talent and look of ultimate importance will perceive Dave's as being the intellectual entrepreneur he really is. ?? ?? ?? ?? James Draper English ...read more.