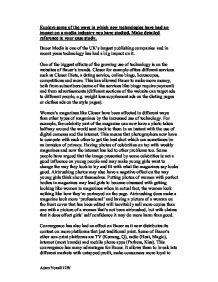 Explore some of the ways in which new technologies have had an impact on a media industry you have studied. Make detailed reference to your case study.

Explore some of the ways in which new technologies have had an impact on a media industry you have studied. Make detailed reference to your case study. Bauer Media is one of the UK's largest publishing companies and in recent years technology has had a big impact on it. One of the biggest effects of the growing use of technology is on the websites of Bauer's brands. Closer for example offers different services such as Closer Diets, a dating service, online bingo, horoscopes, competitions and more. This has allowed Bauer to make more money, both from subscribers (some of the services like bingo require payment) and from advertisements (different sections of the website can target ads to different people, e.g. weight loss supplement ads on the dieting pages or clothes ads on the style pages). Women's magazines like Closer have been affected in different ways than other types of magazines by the increased use of technology. For example, the celebrity part of the magazine can now have a photo taken halfway around the world sent back to them in an instant with the use of digital cameras and the internet. ...read more.

of a woman that's not been airbrushed, but with claims that it does effect girls' self confidence it may do more harm than good. Convergence has also had an effect on Bauer as it now distributes its content on more platforms that just traditional print. Some of Bauer's other non-print platforms are TV (Kerrang, Q), radio (Heat, Magic), internet (most brands) and mobile phone apps (Parkers, Kiss). This convergence has many advantages for Bauer. It allows them to break into different markets with untapped profit, make consumers more loyal to different brands and use different forms of advertising. Overall, it allows them to have greater potential profits and greater power. Media institutions like Bauer use globalisation (selling their products in different countries) with many of their brands. It first of all allows them to break into markets that may not have any competitors in which will provide them with greater profits. Also, a company with established brands around the world will have much greater power than a company with brands in just one company. ...read more.

Getting rid of print based media would also cut down on paper wastage and litter, making the company 'greener' from an environmental standpoint. Because of the internet, different multimedia content could be offered inside the magazine like video or audio and different ways to interact with the magazine could be introduced very easily. However, the loss of print based magazines would involve job cuts and for many people, print based magazines are much more preferable, especially for less technologically experienced people. In conclusion, the growing use of new technologies has had a massive impact on media institutions, specifically Bauer. It's allowed them to reach new markets and get their media to different people using different mediums around the world. At the same time, it's had some negative effects such as contributing to the celebrity obsessed culture of western countries and making paparazzi a lot more competitive. However I believe overall it's had a good effect and in the future will continue to make companies like Bauer innovative. ?? ?? ?? ?? Adam Yoxall 12W ...read more.