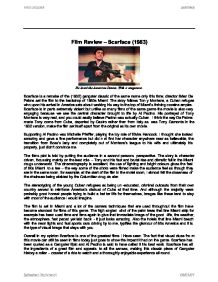 Film Review - Scarface (1983) He loved the American Dream. With a vengeance. Scarface is a remake of the (1932) gangster classic of the same name only this time; director Brian De Palma set the film to the backdrop of 1980s Miami. The story follows Tony Montana, a Cuban refugee who upon his arrival in America sets about working his way to the top of Miami's thriving cocaine empire. Scarface is in parts extremely violent but unlike so many films of the same genre the movie is also very engaging because we see the central character brought to life by Al Pacino. His portrayal of Tony Montana is very real, and you could easily believe Pacino was actually Cuban. ...read more.

The films plot is told by putting the audience in a second persons perspective. The story is character driven, focussing mainly on the lead role - Tony and his fast and brutal rise and climatic fall in the Miami drugs underworld. The cinematography is excellent, the use of lighting and bright colours gives the feel of 80s Miami to a tee - the way some of the shots were filmed make the audience feel as though they are in the same room, for example, at the start of the film in the motel room, I almost felt the closeness of the chainsaw being wielded by the Columbian drug dealer. The stereotyping of the young Cuban refugees as being un-educated, criminal outcasts from their own country served to reinforce America's distrust of Cuba at that time. ...read more.

Also the hotels that line Miami beach with the neon lights and fast sports cars driving by to me, typifies the glamour of 80s America and it is the type of visual image that stays with you. Overall in my opinion Scarface is one of the greatest films I Have seen. The fact that visual clues from this movie can still be seen in films today just goes to show the impact it had on the genre. Scarface has been quoted as a Gangster Epic and Al Pacino is said to have called it his best work. Scarface has all the ingredients of a great film and appeals to all the senses, making this classic piece of Gangster history a roller - coaster of a ride to watch and a thoroughly enjoyable experience all round. Film Studies Scarface Sebastian Burkhardt 08/05/07 ...read more.

This is very a personal conclusion to a very personal appraisal of this film. Some might argue that this has no place in academic writing (which usually is based around a solid critical theory) but in fact there IS place for personal opinion and even explicit bias in scholarly writing. However, it is usually required that the essayist makes it very clear that the argument they will present is biased by personal predeliction, and usually the essayist also makes at least a passing reference to people who disagree with their opinion, and what the basis for this disagreement might be. e.g. some people argue that the racism, sexism and violent machismo of this film weakens its attempts at political comment.

Overall, however, the bias of this discourse is not its main weakness - the scarcity of detailed analysis of examples of events and imagery from within the film is where it most needs development. Most of what the essayist observes is both accurate and insightful, we just need more of the same.