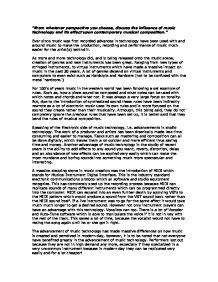 From whatever perspective you choose, discuss the influence of music technology and its effect upon contemporary musical composition.'

"From whatever perspective you choose, discuss the influence of music technology and its effect upon contemporary musical composition." Ever since music was first recorded advances in technology have been used with and around music to make the production, recording and performance of music much easier for the artist(s) behind it. As more and more technology did, and is being released onto the music scene, creation of genres and new instruments has been great. Ranging from new types of stringed instruments, to virtual instruments which have made a massive impact on music in the past 30 years. A lot of genres depend on virtual instruments and computers to even exist such as Hardstyle and Hardcore (not to be confused with the metal 'hardcore.') For 100's of years music in the western world has been following a set example of rules. Such as, how a piece sound be composed and what notes can be used with which notes and chords and what not. It was always a very large focus on tonality. But, due to the introduction of synthesized sound these rules have been indirectly rewrote as a lot of electronic music uses its own rules and is more focused on the sound they create rather than their musicality. ...read more.

The advancement of music technology has made massive differences on how music is created and perceived in modern day, however, it is to be noted that not everyone have benefited greatly in the advancement of music technology. Performers lost out because they are not in high demand any more, especially if they specialized in a very uncommon instrument because in modern day they can be replicated very easily and for a lot cheaper! It has been said that live performances have been affected because a lot of performances always include a computer or two in the setup which takes away the realism of the event. Although, the same could be said by saying that the age of the live performance is quickly becoming outdated and computer performances with a lot of visuals is slowly becoming the future. Music Technology has shaped music to what it has become to day, it can be argued for the good and the bad, but it cannot be denied that Music drastically changes form and sound every year due to new gadgets and programs coming out that can manipulate any sound, any time, any where. It has been so powerful that it has been the death of genres, but also has been the cause of other genres. ...read more.

I think this slight touch really adds to the spacious sound and the character of the track. Although making a spacious relaxing track, I did however keep two samples of the original track pseudo-instrument sounding, to give the track a slight 'trippy' feel which enhances the space, atmospheric and relaxing feel that was intended. Around 2 minutes and 20 seconds a more robotic bass sound is panned to the left, which almost suggests a sort of 'returning to the atmosphere' image which at the same time marks the song is coming to an end, all most as if you're returning from your trip to space! I think the use of panning was vital in my re-composition as it can create a stereo and 3 dimensional sound which I think is essential for capturing the visual image of space. There for I panned the two most defining and robotic sounds to the very far left and right, then worked my way to the middle panning each track slightly left and right. This also helped with the overall sound of the composition as frequencies where not being cancelled out with other sounds that where also on the same frequency band. Overall I am pleased with my re-composition as I think it captures what I was intending to capture which is a feeling of relaxation and a near floating in space experience. ...read more.