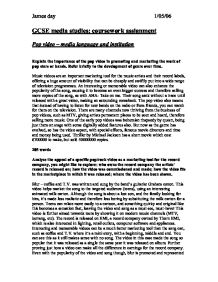 James day 1/05/06 GCSE media studies: coursework assignment Pop video - media language and institution Explain the importance of the pop video in promoting and marketing the work of pop stars or bands. Refer briefly to the development of genre over time. Music videos are an important marketing tool for the music artists and their record labels, offering a huge amount of visibility that can be cheaply and swiftly put into a wide range of television programmes. An interesting or memorable video can also enhance the popularity of the song, causing it to become an even bigger success and therefore selling more copies of the song, as with AHA- Take on me. Their song sank without a trace until released with a great video, making an astounding comeback. The pop video also means that instead of having to listen for new bands on the radio or from friends, you can watch for them on the television. There are many channels now thriving from the business of pop videos, such as MTV, giving artists permanent places to be seen and heard, therefore selling more music. ...read more.

This video is further aimed towards teens by showing it on modern music channels (MTV, kerrang, etc). The record is released on EMI, a record company owned by Thorn EMI, which is also interested in lighting, retail outlets, computer software and appliances. Interesting and memorable videos can be a much better marketing tool than the song can, such as coffee and T.V. where it's a mini story, with a beginning, middle and end. You can see this as it still makes sense with no song. The video in this case made the song so popular that it was released as a single the same year it was released on album. Further proving just how a video can make all the difference in earnings for the record company. Even with the popularity of the video and song though, blur is promoted and represented with little reference to the company itself, only a mention at the beginning of the song under the name. But this doesn't matter as long as the video is seen by lots of people. ...read more.

This will interest teens as it's something they can relate to, and an interesting topic that could possibly help them with dating. The close- ups in the video take us almost into the mind of the character, and as we only let people we trust get that close, they make for an intimate shot. This is an attention-grabbing shot and makes you concentrate on the video. Also, split screen is used to show what each character is doing at the same time, i.e. there is one where they are passing each other, and you can see both their faces. These shots are interesting also, as you get 2 different points of view, showing the 'first indications' of romance in one case. The rest of the video is basically long and medium shots of the characters going about their lives, with the boy in love with this girl. This supports the lyrics, and echoes them in a visual image that will help the song tenfold by providing an interesting video. This will stick in the minds of teens for the reason that it's part of their lives. I think this easy to understand, and relate-to love- flick video will help teens feel involved in the artists songs, therefore boosting sales. 300 words. ...read more.