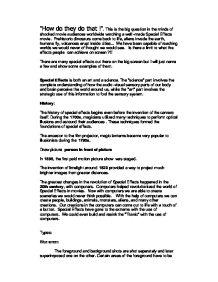 &quot;How do they do that !&quot;. This is the big question in the minds of shocked movie audiences worldwide watching a well-made Special Effects movie.

"How do they do that !". This is the big question in the minds of shocked movie audiences worldwide watching a well-made Special Effects movie. Prehistoric dinosaurs come back to life, aliens invade the earth, humans fly, volcanoes erupt inside cities... We have been capable of reaching worlds we would never of thought we would see. Is there a limit to what the effects people can achieve on screen ?!! There are many special effects out there on the big screen but I will just name a few and show some examples of them. Special Effects is both an art and a science. The "science" part involves the complete understanding of how the audio-visual sensory parts of our body and brain perceive the world around us, while the "art" part involves the strategic use of this information to fool the sensory system. History: The history of special effects begins even before the invention of the camera itself. During the 1700s, magicians utilized many techniques to perform optical illusions and astound their audiences. These techniques formed the foundations of special effects. The ancestor to the film projector, magic lanterns became very popular to illusionists during the 1790s. Draw picture person in front of picture In 1895, the first paid motion picture show was staged. The invention of limelight around 1820 provided a way to project much brighter images from greater distances. ...read more.

Jim Carry mask- hair. Weather: Rain- hose with holes in it. Ssnow- snowmaker Wind- big fans that are blown at high speeds. Slow Motion In the movie "The Matrix," the filmmakers use an extremely sophisticated technique to accomplish much more advanced effects. Not only does the rotation occur, but the actor is also moving in slow motion during the rotation (see the first link below for three extremely nice full-motion demos). At least five different special-effect techniques are combined to create the final image: * A large number of still cameras capture the scene, but they fire sequentially around the actor rather than all at once. * The cameras shoot the actor on a green-screen background (see How Blue Screens Work for details on this technique). * The actor is wearing a wire suspended from the ceiling so that he can fall only part-way or appear to float in mid-air. * Once the scene is shot, software similar to morphing software interpolates between the images to allow the slow-motion feel. The filmmaker can therefore slow down or speed up the action at will. Computer-generated backgrounds are then superimposed onto the film. Blood bags/ bullet hits There is a variety of movies out there with scenes that show a person getting hit by numerous bullets, and when they impact the body blood bursts out from the body, through the shirt, and gushes everywhere. ...read more.

Special Effects spices up movies; makes them very entertaining. The impossible becomes possible with Special Effects. If we did not use Special Effects the revolution of movies would be really slow and boring and movies would be really basic. With Special Effects in movies we can create a endless possibilities and bring dreams, illusions, and fantasies to life. We have brought aliens back to life, monsters have rampaged through out cities, the reenactment of the "Titanic" sinking made it look as if we were there. Try and picture our society with just the basics of Special Effects, it would be really boring. Sing-A-Longs, silent movies, black and white movies would be at the highest of special effects. The society of today has grown with the Special Effects used in movies. We are no longer amazed by the Mary Poppins "Sing Alongs" not even children. Society needs some kind of Special Effects in the movies they watch, which could be from making people appear older to making the Titanic the sink again. Not too many movies without special effects attract us. In Conclusion, Special Effects have brought other worlds to our eyes, things that we would never imagined we would catch a glimpse at, and Volcanoes have erupted and destructed the city of Los Angeles. Special Effects have revolutionized the way we are entertained, they have made movies almost seem so real. Special Effects are not biased against age, they come in all shapes and sizes, and for the kind of movie anyone would like to watch. ...read more.