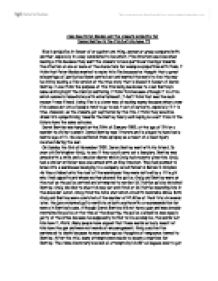 How does Peter Medak gain the viewer's sympathy for Derek Bentley in the film 'Let him have it'?

How does Peter Medak gain the viewer's sympathy for Derek Bentley in the film 'Let him have it'? Bias is prejudice in favour of or against one thing, person or group compared with another, especially in a way considered to be unfair. Film directors use bias when making a film because they want the viewers to have particular feelings towards the situation or one or more of the characters for example sympathise with them. I think that Peter Medak wanted to make this film because he thought that a great miscarriage of justice had been carried out and wanted the world to feel the way he did by making a film version of the true story that is biased in favour of Derek Bentley. I also think the purpose of this film being made was to clear Bentley's name and highlight the family's suffering. I think this because although it is a film which connects immediately with entertainment, I don't think that was the main reason it was filmed. Using film is a clever way of making money because when a new film comes out lots of people tend to go to see it out of curiosity, especially if it is true. ...read more.

Another very obvious reason is that he did not commit a murder; he was accused of inciting his friend to murder which he and Craig both denied. Peter Medak has gained our sympathy for Derek Bentley using several different methods. After watching this film the viewer feels quite emotional and sorry for Derek. The film most certainly portrays him to be harmless and innocent, he is played by Chris Eccleston as a likeable teenager, inoffensive, fond of his family, able to deal with life in its ordinary aspects, but incapable of standing up to his friend Chris. The film makes us feel sorry for Derek and puts us on his side; this is done by focusing Derek as the main character. Christopher Craig is shown as the stereotypical "baddie" in the film who influences Derek into wrong. The introduction of Chris Craig into the film is quite the typical entry of an evil, mischievous character, so the audience immediately knows that Craig is the villain on first sight. Medak builds a case that leaves no doubt in the viewers mind that Bentley should never have been tried. He follows Bentley's life episodically from the time he as a child was buried alive in a building rubble during the bombing of London; an experience that that Medak implies left Bentley with epilepsy or other brain damage or both. ...read more.

This was the idea that Bentley was working on when he accepted the knuckle-duster from Craig, After a few minutes of questioning from the barrister, the judge joined in with his own questions, which made it seem as though the two men were attacking Bentley and forcing him to confess. As Bentley becomes more and more terrified the director shows the audience things from Bentley's point of view: the camera flicks back and forth from Humphreys to the judge as they alternately fire questions at Bentley. The camera then zooms in on Bentley who, at the director's choice, still has bruises left over from Fairfax's rough treatment of him, two months earlier. These bruises heighten the audience's feelings of self pity towards Bentley and also make him appear more vulnerable. As the camera continues to zoom in on Bentley the audience can hear his increasingly tense breathing and nervousness and see his eyes flickering around the room. The director has done this in order to show the audience how weak and vulnerable Bentley really is. The fact that he is crying also shows the audience how child-like he is. There have been many films about capital punishment. They all convey the same message: no matter what arguments can be made in its favour, if the law makes a mistake, an innocent life is lost. Few lives were more innocent than Derek Bentley's. ...read more.