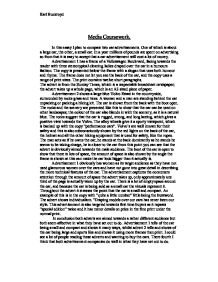 In this essay I plan to compare two car advertisements. One of which is about a large car, the other, a small car. In a year millions of pounds are spent on advertising so from that it is easy to accept that a car advertisement will cost a lot of money.

Media Coursework. In this essay I plan to compare two car advertisements. One of which is about a large car, the other, a small car. In a year millions of pounds are spent on advertising so from that it is easy to accept that a car advertisement will cost a lot of money. Advertisement 1 has a frame of a Volkswagen Boulevard, facing towards the reader with three stereotypical cleaning ladies draped over the car in a humours fashion. The copy is presented below the frame with a slogan that uses both humour and rhyme. The frame does not let you see the back of the car, and the copy uses a range of print sizes. ...read more.

The alloy wheels give it a sporty viewpoint, which is backed up with the copy "performance cars". Volvo's are well known for their safety and this is also subconsciously shown by the red lights on the back of the car, the helmet and all the other hiking equipment that is used for safety, like the ropes. The man acts as if he owns the car, he stands at the back dominantly as he stands he seems to be taking charge, he is closer to the car from this point you can see that the advert is obviously aimed towards the male audience. The boot of the car is open to show that there is lots of space, the amount of space is also shown by the angle the frame is shown at this can make the car look bigger than it actually is. ...read more.

The advert shows individualism. "Draping models over our cars has never been our style. This advertisement is also targeted towards first time buyers as it repeats "special edition" twice and it has minor details on price in the fine print under the normal print. In conclusion both adverts are aimed towards a rather different audience but both seem affective in what they have set out to do. Advertisement 1 tells of the car being small and compact and shows it many ways, whilst advert 2 tells and shows of the car being large and sports like and shows it using more frames then print. I could see a lot of people reading these adverts and wanting to buy the cars. There fourth I think that both advertisement companies do well in what they have set out to do. Karl Buckroyd ...read more.