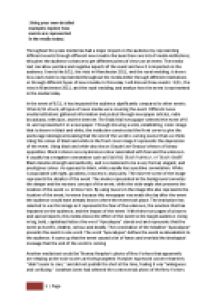 In this essay I will discuss three events: 9/11, the riots in Manchester 2011, and the royal wedding, and analyze how the event is represented in the media today.

﻿[Using your own detailed examples explore how events are represented in the media today] Throughout the years media has had a major impact on the audience by representing different events through different news media. Because there are lots of media institutions, this gives the audience a chance to get different points of views on an event. The media text can allow positive and negative aspects of the event and how it is impacted on the audience. Events like 9/11, the riots in Manchester 2011, and the royal wedding, it shows how each event is represented throughout the media either through different institutions or through different types of news media. In this essay I will discuss three events: 9/11, the riots in Manchester 2011, and the royal wedding, and analyze how the event is represented in the media today. In the event of 9/11, it has impacted the audience significantly compared to other events. When 9/11 struck, all types of news media were covering the event. Different news media institutions gathered information and posted through newspaper articles, radio broadcasts, television, and the internet. The Daily Mail newspaper selected the event of 9/11 and represented it in a newspaper. Through showing a wide, establishing, iconic image that is shown in black and white, the institution constructed the front cover to give the anchorage ideological meaning that the end of the world is coming sooner than we think. ...read more.

The documentary also specifically blames Osama Bin Laden for the reason of the attack, making this documentary very biased towards one side. The sounding in this documentary is very natural and realistic, natural sounding is used in interviews. Audio conversations are shown between Betty Oang, who is an air hostess for one of the planes, and the Texas Operation Centre; this is in the middle of the documentary, where the conflict arises and to create tension to the sequel. Mysterious non-diegetic music is being played in the background of the interviews and clips. The sound tends to work alongside with the camera work; this is shown constantly throughout the documentary. The background music is related towards the people?s moods in the documentary. Inside 9/11 covers the story of the conflict between religions as the Muslims, the Christians and the Jews since 1980?s. It also represents the story of a young Samaritan who reveals to be Osama bin Laden, who decides America, is one of the greatest infidels and needs to pay. Around the story of these religious conflicts, another story is built, and that?s the one of the 9/11 events. The documentary contains a linear narrative parts, since the events are explained, following the year of each important event. The story is also accompanied by the voice of the narrator- also from time to time the narrative is paused and testimonials of eye witnesses or researchers are presented to us in order to give reference for the information we received. ...read more.

The reporter had selected to use the kiss event at the end as it would create the concept on the impact of the audience. ?The fleeting embrace sent the already ecstatic crowds wild, and was repeated during a flypast,? represents the audience emotion of the love between the newlywed couple and how it represents Britain?s passion for its royal family. The anchorage ideological meaning of the article is how one event brings the country closer, and how it is impacted on the audience and the royal family. Events are represented in the media today through different media such as articles, documentaries, and images. These represent the event through the connotation and denotation of the media text. The event is also represented on how it is impacted on the audience, and how one event can bring a country at its knees. Through the events of 9/11, the Greater Manchester Riots in 2011, and the Royal Wedding they all represent how something negative or positive can create such a commotion with the audience. These events are represented in the media today as they are still a common topic that comes up with today?s society. Since they were contemporary the audience would still have a memory of it so if seen a picture or an article they would have an immediate memory of the event. Overall, events are represented in the media today through different news media sources or different media texts and presents how an event impacts on the audience. Word Count: 2,474 | Page ...read more.