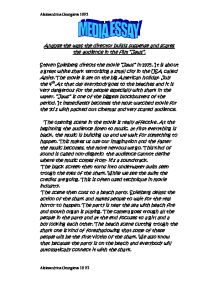 Analyse the ways the director builds suspense and scares the audience in the film "Jaws". Steven Spielberg directs the movie "Jaws" in 1975. It is about a great white shark terrorising a small city in the USA called Amity. The movie is set on the big American holiday: July the 4th.At that day everybody goes to the beaches and it is very dangerous for the people especially with shark in the water. "Jaws" is one of the biggest blockbusters of the period. It immediately becomes the most watched movie for the 70's with packed out cinemas and very scared audience. The opening scene in the movie is really affective. At the beginning the audience listen to music, at first everything is black, the music is building up and we wait for something to happen. This makes us use our imagination and the faster the music becomes, the more nervous we go. This kind of sound is called non-diegetic: the audience cannot define where the music comes from- it's a soundtrack. The black screen then turns into underwater swim seen trough the eyes of the shark. While we see the swim the credits are going. This is often used technique in movie industry. The scene then cuts to a beach party. ...read more.

This is warning for danger: the shark has arrived. The low angle shot gets closer and closer to the boy with yellow lilo and cuts with long shot of the actual attack seen in distance. Brody realizes what was going on and with zoom the camera shows us his frightened face. The shark attack is really disturbing. From distance we see a big fountain of blood mixed with seawater. Everybody is screaming. Medium long shot shows us every single person comes out of the sea; crying parents run into the water to take their children. And when all are out only the mother of the boy with the yellow lilo can't find her son. This is even more disturbing for the audience: one mother who before five minutes had a young, healthy son ends up with seeing the b****y lilo washed out of the water. After this horrifying scene our imagination still plays big part. This time we've seen a little bit more of the killer shark but still not seeing the whole thing. This is the scariest moment of the movie so on and the camera shows us more violence. Half way trough the movie our tension is still building up. We've seen the half of it and still no sight of the shark. ...read more.

The animal is so big and powerful that the ship is like toy for it. Spielberg says that this is the last chance for him to scare the audience before the very end. Every body thinks that while they're on the boat it is safe for them, but if they go into water it will be great danger. The boat sinks into the large mouth of the animal and we are about to see the goriest death in the movie: Quint's. The old sailor is actually slipping down the floor of the boat straight towards the enormous "jaws". We can exactly see how they have almost swallowed half of Quint's body. The expression on his face is horrific and blood is coming out of his mouth. After it has eaten Quint the white shark wants more and goes for Brody. Brody picks up a bottle of compressed air and throws it into the shark's throat and shoot at it. This makes the shark go away for a moment so Brody can take a better position. The monster comes back but then Brody shoots the bottle of air and the killer blows out. That's a happy, satisfying end which everybody from any horror movie. I think that the scariest scene in the movie was the one with the dead head, because it was so sudden and realistic that I almost jumped off my chair. ?? ?? ?? ?? Aleksandrina Georgieva 10F2 Aleksandrina Georgieva 10 F2 ...read more.