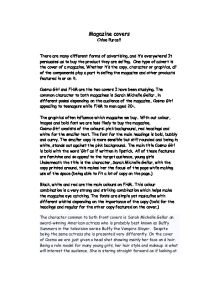 Magazine covers Chloe Purcell There are many different forms of advertising, and it's everywhere! It persuades us to buy the product they are selling. One type of advert is the cover of a magazine. Whether it's the copy, character or graphics, all of the components play a part in selling the magazine and other products featured in or on it. Cosmo Girl and FHM are the two covers I have been studying. The common character to both magazines is Sarah Michelle Gellar, in different poses depending on the audience of the magazine, Cosmo Girl appealing to teenagers while FHM to men aged 20+. The graphics often influence which magazine we buy. With out colour, images and bold font we are less likely to buy the magazine. Cosmo Girl consists of the colours: pink background, red headings and white for the smaller text. The font for the main headings is bold, bubbly and curvy. ...read more.

Despite being the same actress she is presented very differently. On the cover of Cosmo we are just given a head shot showing mainly her face and hair. Being a role model for many young girls, her hair style and makeup is what will interest the audience. She is staring straight forward as if looking at the reader, by doing so this teenage audience may feel like they can connect with her. FHM presents her in a completely different light. A full body image, bed hair, black strappy top, cleavage on show and fly undone are all components that cry out s*x appeal! With hand on hip her pose shows determination and confidence - an invitation to the male audience. Sarah Michelle Gellar's different poses show her progression in career. For example when she started playing Buffy she was innocent, clean cut and very much girl next door similar to her character on the front of Cosmo Girl, the earlier of the two magazines. ...read more.

I believe that this is an excellent way of selling a magazine as people are very conscious of there appearance and always what to keep up keep up with the latest trend. Both magazines get you into viewing the contents by only giving a small amount of either a life story or piece of celebrity gossip, from FHM: "Smashed skull! Splintered legs! Stubbed toes! The excruciating life of Jackie Chan" this is also using alliteration and explanation marks for extra effect and for Cosmo Girl "Back Street Boys fans share there wildest stories ever." Boys being in bold to catch attention to the word as, stereo typically, all girls care about is fashion, make up and boys! Magazines are a very clever piece of advertising. Without the readers knowing they are tempting and usually succeeding into getting us to buy items of clothing, makeup, gifts, movies an most importantly for them the next issue. I feel that both Cosmo Girl and FHM do this well by appealing to their target audience with features previously mentioned. ...read more.