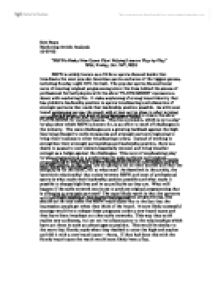 Eric Beste Marketing Article Analysis 10-27-03 "ESPN's Risky New Game Plan: Relying Less on Play-by-Play" WSJ, Friday, Oct. 24th, 2003 ESPN is widely known as a 24-hour sports channel leader that broadcasts the most popular American sports and some of the biggest games, including Sunday night NFL football. The popular sports channel latest move of creating original programming about the lives behind the scenes of professional football players with the show "PLAYMAKERS" represents a dance with marketing fire. It risks weakening of strong brand identity that has yielded a leadership position in sports broadcasting and alienation of strategic partners that made that leadership position possible. As with most brand weakening moves, the result will at best not be close to what is being promised and at worst end up ruining the ESPN brand. Mark Shapiro, the head of broadcasting, decided to create the show PLAYMAKERS for various reasons. This line extension, which is not a play-by-play show which ESPN is known for, is an effort to ward off challenges in the industry. ...read more.

The most likely result is that the partners will find other broadcast avenues for their games. If ESPN wished to continue providing original programming, they should not do this under the ESPN brand name due to the fact that the impression people get when they think of the brand. A more likely successful strategy would be to release these programs under a new brand name and then have them broadcast on other cable networks. This way they could realize new audiences, but yet not be inflammatory to the relationships which have put them in such an advantageous position. This would be similar to the move that Honda made when they decided to enter the high end market and did it with a new brand name - Acura. If they had done this with the Honda brand name the result would most likely been a flop. Another reason given for this dramatic shift in broadcasting philosophy is stated very clearly by Mark Shapiro saying: "If we don't grow, we'll die". ...read more.

Clearly the current brand identity of ESPN is that of a 24-hour sports cable channel showing the big games and giving play-by-play review of past games. But as mentioned by David Stern, NBA commissioner, the moves of ESPN 'raise issues of what they want their brand to be'. Do they want to move in the direction that HBO did from a movie channel to one with an original series? An even worse example that would make many age 20-40 males cringe: ESPN gradually moving away from 24 hour sports to original programming similar to the major move by MTV away from music videos 24 hours a day into various other programming. One friend recently told me that he hated the show PLAYMAKERS and that this move to original programming felt similar to MTV's move lessening the showing of music videos. He said that if ESPN's movement continued in the direction of original programming, that he would cease to watch the channel. The danger clearly in this new strategy of ESPN is that they very much risk alienating not only their strategic partners and but even more importantly their core audience. ...read more.