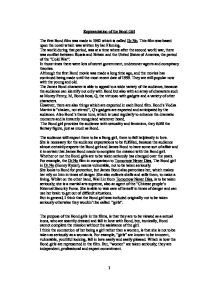 Representation of the Bond Girl

Representation of the Bond Girl The first Bond film was made in 1962 which is called Dr.No. This film was based upon the novel which was written by Ian Fleming. The world during that period, was at a time where after the second world war, there was conflict between Russia and Britain and the United States of America, the period of the "Cold War". In those times there were lots of secret government, undercover agents and conspiracy theories. Although the first Bond movie was made a long time ago, and the movies has continued being made until the most recent date of 1999. They are still popular now with the young and old. The James Bond character is able to appeal to a wide variety of the audience, because the audience can identify not only with Bond but also with an array of characters such as Money Penny, M, Bonds boss, Q, the virtuoso with gadgets and a variety of other characters. However, there are also things which are expected in each Bond film. Bond's Vodka Martini is "shaken, not stirred", Q's gadgets are expected and anticipated by the audience. Also Bond's theme tune, which is used regularly to enhance the dramatic moments and is instantly recognised wherever heard. The Bond girl provides the audience with sexuality and feminism, they fulfil the fantasy figure, just as much as Bond. The audience will expect there to be a Bong girl, there to fall helplessly in love. She is necessary for the audience expectations to be fulfilled, because the audience almost certainly expects the Bond girl and James Bond to have some sort of affair and it is certain that James Bond needs to complete the mission with the Bond girl. ...read more.

The type of shot when we first see her is a long shot, which connotes her s****l potential. She is singing "underneath the mango tree" and collecting shells to sell them, which connotes her childlike behaviour and innocence, she is also dressed in a white bikini, signifying her sexuality. She grabs her knife and says "who's that?" this connotes that she is unsure but will defend herself, when she says her name, James Bond replies by saying "it's a pretty name", which means he is talking to her like a child, and this adds to that fact that she has a s******y-hinted female name. The type of shot when they are walking together on the beach is a medium shot; he is much taller than she is, which connotes his masculinity. She is on Crab Quay collecting shells to sell, which connotes her child like-ways but she has found a simple way to make money; she doesn't have a real profession. When they are hiding behind the sand, his arm is around her waist, which is trying to show that she needs protection. His head in the shot is positioned above hers which indicates he is in charge. Honey says, " there is a dragon" and describes it, which connotes her almost childlike belief in monsters. After the boat has been damaged Bond says "what are we going to with her". Which is as if she isn't there, she's viewed as a possession of his. This shows that in the 60s, women weren't seen as equal to men, they could be seen as objects. ...read more.

Honey would be dependent of Bond, which Bond girls in the 21st century are not. The defences which I can offer the Bond girls as actresses, are that they are respectable women, with professional careers. That they are able to use their intelligence in decision making moments, but these are not always true because they made to be seen as utter fantasy figures. The criticisms are that their careers are unrealistic for the average women and often seem like a joke, that they cannot think for themselves, they rely on Bond for everything, that they are only there when Bond saves the world, to look good on his arm. My opinion is that I think Bond girls should be criticised because their careers are unrealistic and they never appear in a movie for the second time, which means that they are quite forgotten about after the movies are made and the media stops paying attention to it. Conclusion I think that the Bond girl will continue to be a part of the Bond institution and that is quite an empowering image for young women who watch it because, it will make them think differently about these girls. And the Bond girls themselves will acquire a greater responsibility and a greater role to play in each movie. I don't think that this will matter because, James Bond will always be the main character, and continue to add his presence in the movie, which the audience will always pay attention to. I think that the Bond girls will not have to make such a immense change to their character but will have to change gradually. They will continue to have their s****l image and glamorousness to trade with. ?? ?? ?? ?? 1 ...read more.