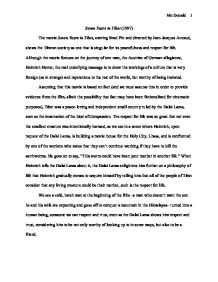 Seven Years in Tibet (1997) The movie Seven Years in Tibet, starring Brad Pitt and directed by Jean-Jacques Annaud, shows the Tibetan society as one that is singular for its peacefulness and respect for life. Although the movie focuses on the journey of one man, the Austrian of German allegiance, Heinrich Herrer, the real underlying message is to show the workings of a culture that is very foreign (as in strange) and mysterious to the rest of the world, but worthy of being imitated. Assuming that this movie is based on fact (and we must assume this in order to provide evidence from the film, albeit the possibility that fact may have been fictionalized for cinematic purposes), Tibet was a peace-loving and independent small country ruled by the Dalai Lama, seen as the incarnation of the God of Compassion. The respect for life was so great that not even the smallest creature was intentionally harmed, as we see in a scene where Heinrich, upon request of the Dalai Lama, is building a movie house for the Holy City, Lhasa, and is confronted by one of the workers who states that they can't continue working if they have to kill the earthworms. He goes on to say, "This worm could have been your mother in another life." ...read more.

The young actor playing the part of the Dalai Lama child owns the role, masterfully conveying a ruler who, despite himself and the regal demeanor expected of him, shows a playful innocence typical not only of a child, but also of a true spiritual leader capable of teaching and guiding, as so often observed in other Holy Men who have gone down in history and who we have been fortunate enough to learn about through books and the personal accounts of those who knew them. Another important scene that so eloquently speaks of the nature of the people and the city is when Heinrich talks about the preparations for defending the city from the Chinese invasion, saying, "The spectacle of a peace-loving nation, vainly attempting to create a military!" while watching the men attempt to gather weapons and organize themselves. He recalls how once he was a part of the German Nazis, who not too long ago had had the same agenda as China, that of overpowering weaker peoples, drawing an important parallel between Tibet's situation with the Chinese and the situation of countries such as Poland during the period of World War II. The movie successfully establishes a contrast between the benefits of peace and the harmfulness of war, and could be considered an anti-war movie based on historical events that, in this particular case, changed the country of Tibet forever. ...read more.

And so the movie ends, with Heinrich leaving Lhasa for Austria in search of the son who he first refused and then could not keep out of the back of his mind, taking with him the beloved music box that the Dalia Lama had received as a child and has now bestowed on him, the one that plays Debussy's wistful "The Moonlight"; finding his son and recovering the relationship that was meant to be between them. And in the end we see him mountain climbing with his son, in a place that looks very much like the Himalayas, atop a peak where he leaves behind a Tibetan flag as a marker that he was there, much like the movie leaves behind in its wake a feeling that there is something out there, something that we need to find, something that we can seek out by maybe taking a journey, by following our heart and listening to our spirit, maybe not going as far as Heinrich Herrer did in a physical sense, but traveling just as long to arrive at that place where we are free to be what we were meant to be, that place that is ourselves. ?? ?? ?? ?? 1 Mc Donald ...read more.