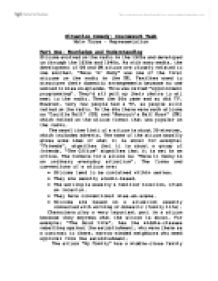 Situation Comedy: Coursework Task Main Focus - Representation Part One: Knowledge and Understanding Sitcoms evolved on the radio in the 1920s and developed on through the 1930s and 1940s. As with many media, the development of US and UK sitcom are closely related to one another. "Amos 'n' Andy" was one of the first sitcoms on the radio in the UK. Families used to structure their domestic arrangements because no one wanted to miss an episode. This was called "appointment programming". They'd all pull up their chairs to sit next to the radio. Then the 50s came and so did TV. However, very few people had a TV, so people still relied on the radio. In the 60s there were such sitcoms as "Lucille Ball" (US) and "Hancock's Half Hour" (UK) which relied on the sitcom format that was popular on the radio. The usual time limit of a sitcom is about 30 minutes, which includes adverts. The name of the sitcom usually gives some idea of what it is about for example: "Friends", signifies that it is about a group of friends. "The Office" signifies that it is set in an office. ...read more.

Onslow drinks beer all day from the bottle or can and he also gets Violet to open his beer for him and change the channel on the television because he is too lazy. When hyacinth answers the telephone she says "The Bucket residence, the lady of the house speaking." She emphasis' the 'u' (to make her surname sound upper class and posh. In view of that fact, when Violet's phone rings nobody will answer it, but eventually Rose comes down stairs to answer as Violet and Onslow are too indolent. When Rose finally gets to the telephone she checks her image (what she looks like) before answering the phone. The Bucket's house and garden is very neat, tidy and spacious. Hyacinth dusts and trims her plants everyday. As well as that, she also dusts the phone before she answers or uses it, where as Onslow and Violets house and garden is the complete opposite. It is cramped, dirty and they have very old and worn furniture. In their front garden there is an old damaged and out of order car wreck, in which a stray dog lives. Section B: Representation of Gender The representation of gender, in "Men Behaving Badly", is signified by stereotypes. ...read more.

My sitcom is called "Gee Wizz" It is about a family who own a caf�. There are four main characters, Emma (the mother), Phil (Phillip), Lily and Rebecca. 1 Emma is the single mother who wears too much make-up and dresses too young for her age. She thinks that she is really good at cooking although she isn't, but Paul and Lily (her children) don't tell her that her food is disgusting. She also flirts with a lot of Phil's friends, which is increasingly embarrassing for Phil and his friends. 2 Phil is 16 years old. He is obsessed with girls, working out and cars. He always gets distracted while he is working in the caf� by pretty girls. He's embarrassed by his mum's dress sense. 3 Lily is the "normal" person in the family, but she uses it to her advantage. She finds Phil's obsession for girls hilariously pathetic, as he usually can't "win girls' hearts" as he is too "purvey". There is one girl who is fanatical about Phil who is called Rebecca. 4 Rebecca is a "nerd". She isn't very attractive and wears "geeks" glasses. She loves to eat Emma's cakes and food, where as everyone else finds it revolting. Rebecca adores Phil and is always trying to see him, but he trying to hide from her. ...read more.