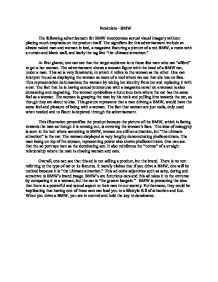 The following advertisement for BMW incorporates s****l visual imagery without placing much emphasis on the product itself. The signifiers for this advertisement include an almost naked man and woman in bed, a magazine featuring a picture of a red BMW

Feminism - BMW The following advertisement for BMW incorporates s****l visual imagery without placing much emphasis on the product itself. The signifiers for this advertisement include an almost naked man and woman in bed, a magazine featuring a picture of a red BMW, a room with a curtain and blank wall, and lastly the tag line "the ultimate attraction." At first glance, one can see that the target audience is to those few men who can "afford" to get a hot woman. The advertisement shows a woman figure with the head of a BMW car, under a man. ...read more.

The woman symbolizes a luxurious item where the car has the same feel as a woman. The woman is grasping the man by his neck and pulling him towards the car, as though they are about to kiss. This gesture represents that a man driving a BMW, would have the same feel and pleasure of being with a woman. The fact that women are just tools, only used when needed and to flaunt is depicted through the advertisement. This illustration personifies the product because the picture of the BMW, which is facing towards the man as though it is coming out, is covering the woman's face. ...read more.

There is no text referring to the type of car or its features. It merely claims that if you drive a BMW, one will be noticed because it is "the ultimate attraction." This ad coins adjectives such as sexy, daring and attractive to BMW's brand image. BMW's are luxurious cars and this ad takes it to the extreme by comparing it to a woman, but the car is "the greater bargain." BMW is promoting the idea that there is a powerful and s****l aspect to their cars in our society. Furthermore, they could be implicating that having one of these cars can lead you to a lifestyle full of attraction and l**t. When you drive a BMW, you are in control and hold the key to dominance. ...read more.