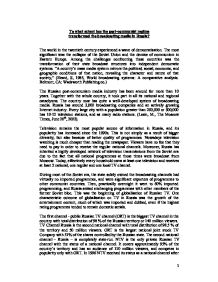 To what extent has the post-communist regime transformed the broadcasting media in Russia?

To what extent has the post-communist regime transformed the broadcasting media in Russia? The world in the twentieth century experienced a wave of democratisation. The most significant was the collapse of the Soviet Union and the demise of communism in Eastern Europe. Among the challenges confronting these countries was the transformation of their state broadcast structures into independent democratic systems. "A country's mass media system mirrors the political, social, economic, and geographic conditions of that nation, revealing the character and nature of that society," (Heard, S, 1985, World broadcasting systems: A comparative analysis. Belmont, CA: Wadsworth Publishing co.) The Russian post-communism media industry has been around for more than 10 years. Together with the whole country, it took part in all its national and regional cataclysms. The country now has quite a well-developed system of broadcasting media. Russia has around 3,000 broadcasting companies and an actively growing Internet industry. Every large city with a population greater than 200,000 or 300,000 has 10-12 television stations, and as many radio stations. (Lesin, M., The Moscow Times, June 20th, 2002). Television remains the most popular source of information in Russia, and its popularity has increased since the 1990s. ...read more.

The appearance of such outlets, and their fast evolution became possible due to high costs of print media production and distribution as well as the big numbers of young people with technical and journalistic education, very often without clear prospects of jobs. Polit.ru, a news and politics Internet portal is one of the oldest Russian newsites on the Internet (founded in 1996). By the year 1999, Russia already had several prominent online publications: gazeta.ru, lenta.ru, vesti.ru, and utro.ru (www.russ.ru). More Russians got acquainted with the internet as a news and information medium in the summer of 2000 during the disaster aboard the Russian submarine Kursk, and the Ostankino TV tower fire, which paralysed broadcasting of the leading national channels. Another example of a popular Internet portal is strana.ru - a national information system that includes a main portal and regional websites in each of Russia's federal districts. All leading national channels are broadcast on this site in real-time. Strana.ru has also developed several special projects, and although is officially an independent Internet site, it works very closely with the state media, mainly with the state television, and very often is seen as an Internet mouthpiece for the Russian authorities. ...read more.

This problem that was the most obvious in the media was the coverage of the military conflict in Chechnya. Several media outlets, and individual journalists, have been warned by the ministry of information about the way they present this conflict. Journalists working in Chechnya are not only required to have special authorisation issued by federal authorities, but they also have to be accompanied by federal representatives. On many occasions the Russian Information Centre in Chechnya, is the only source of information for journalists who are not allowed to receive information from other sources. Until not long ago, one of the crucial criteria determining the relative independence of media in post-communist Russia was it's being private, rather than state owned. This seemed to be a valid argument at the time. Despite the progress being achieved in broadcasting media in post-communist Russia, the present picture of media is far from optimistic, and political situations and influence over media are not beneficial to the consolidation of democracy. (Freedom House, Press Freedom in the World, 1995-1999). The media in Russia has moved from propaganda in communist times to manipulation in post-communist times. The media can play the role of the "Fourth Sector", alongside other state institutions, provided it is pluralistic and free of obsessive governmental or private control and censorship. ...read more.