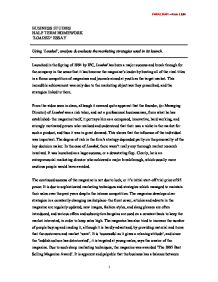 BUSINESS STUDIES HALF TERM HOMEWORK 'LOADED' ESSAY Using 'Loaded', analyse & evaluate the marketing strategies used in its launch. Launched in the Spring of 1994 by IPC, Loaded has been a major success and break through for the company in the sense that it has become the magazine's leader by beating all of the rival titles in a fierce competition of magazines and journals aimed at youth as the target market. This incredible achievement was only due to the marketing objectives they prescribed, and the strategies linked to them. From the video seen in class, although it seemed quite apparent that the founder, (or Managing Director) of Loaded was a risk taker, and not a professional businessman, from what he has established- the magazine itself, it portrays him as a composed, innovative, hard working, and strongly motivated person who realised and understood that their was a niche in the market for such a product, and thus it was in great demand. This shows that the influence of the individual was important. The degree of risk in the firm's strategy depended partly on the personality of the key decision maker. ...read more.

Although the magazine wasn't advertised when it was launched, as the demand for advertising was high, and owing to its lofty costs, it literally was 'discovered', and it's fame was brought about by 'word of mouth'. Other impediments for advertising included the fact that the magazine had too much s*x in the face. For most people, it was a shock at start. However, the actual advertising in the magazine itself is noted for it's tremendous success, especially for Men's fashion. The only risk however, which the company face is, 'how far they could go with the explicitness of the material?' Although, most women don't really mind it, a minority believe that it causes this vulnerability feeling and a socially immoral attitude towards them where whenever they walk past a group of males, they are whistled at, or even commented. The magazine began selling at a low of 95 pence for Issue 1. However, by Issue 2, as they had realised the lumpsome of capital and cash inflow, it increased to $2.00, and by Issue 3, it had gone even higher to $2.20, where it has finally settled. ...read more.

The Price is held at a level notified as 'Premium Pricing', where quality is provided at fair price values. The business objectives in the case of Loaded were (as mentioned previously), profit and to aim for a growing market, as well as survival, as it was a risk. The drive for profit, which motivates the business decisions, has a very important implication. It means the business will; always be striving to defeat the competition. Direct competition is bad for business because it forces prices down. That's why the producer of Loaded strived for competitive advantage, which made them stand out from the rest of their rivals such as 'Fiesta'. The social attitudes of the market at the time of the launch of the magazine were luckily when the economy was just coming out of the 1996-97 recession. Thus, people were willing to buy such affordable products, which provided their wants. In addition, since the company is operating in a segmented market, competition is fierce as people can choose from a range of similar magazines in the same 'women's magazines' market. However, owing to the marketing strategies involved by each rival, the buyers select the one which is scarce or, most closely fits to their needs. FARAZ.RAFI - Form L6JH 1 ...read more.