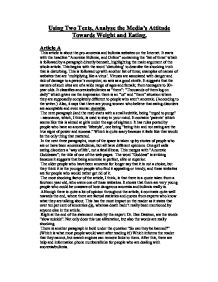 Using Two Texts, Analyse the Media's Attitude Towards Weight and Eating. Article A This article is about the pro-anorexia and bulimia websites on the Internet. It starts with the headline "Anorexic Bulimic, and Online" containing the 'list of three' which is followed by a paragraph directly beneath, highlighting the main argument of the whole article. This begins with the word 'disturbing' to describe the shocking truth that is disturbing. This is followed up with another list of three; examples of names of websites that are 'multiplying like a virus'. Viruses are associated with danger and risk of damage to a person's computer, so acts as a good simile. It suggests that the owners of such sites are of a wide range of ages and female; from teenagers to 30+ year olds. It classifies anorexics/bulimics as "them": "Thousands of them log on daily" which gives me the impression there is an "us" and "them" situation where they are supposedly completely different to people who aren't anorexic. (According to the writer.) Also, it says that there are young women who believe that eating disorders are acceptable and even worse: desirable. ...read more.

This has the most impact on the reader as it states that over ten per cent of anorexics die, whereas death hadn't really been mentioned by anyone else in the article. Right at the end of the statement made by the expert: Dr. Dee Dawson, are the words "slow suicide". Not only does this use alliteration, but also the words are really shocking. There is another paragraph in bold under the question "So can they be banned?" (Which is what most people would want after reading it!) Which informs the reader that they cannot, but search engines can remove links to them. After this, there are help and information phone numbers/links for people who are dealing with anorexia/bulimia. This article is not very eye catching, mainly because it is in black & white, but it does have an interesting picture of a girl looking into a mirror, with her reflection looking unhappy and depressed, and there is a computer monitor with the words "Anorexic Goddesses" on it. The picture makes you feel almost sympathetic, and brings out the drama and emotion in the text. ...read more.

Even though the language used here is informal, it is very informative and balances this out with lots of complicated scientific research and facts. The last sentence ends quite abruptly on "wash the lot down with some unsweetened fruit juice". I find this is almost as if you are supposed to immediately going to start using this guide the minute you have finished reading it. The picture is quite clever, because there are lots of ways to look at it. It is a photograph of a woman who is holding a shiny red apple and smiling, but looks rather plain. The unpleasant factor about this is that the lighting makes her look even thinner than she is - almost skeletal, and her bones look like they are sticking out. She also looks a bit masculine because her jaw is quite square and her hair is done in such a way that it looks incredibly short and glued to her head. On the other hand, she has brilliant white teeth, and could represent the healthiness of the apple. The apple may also be seen as a link to Eve (from the Bible in the Garden of Eden) or the temptation of female sexuality to lure the reader in. ...read more.