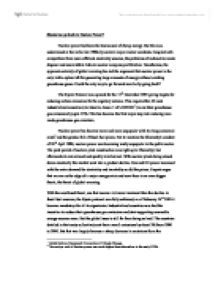 AS: Science for Public Understanding: Should we go back to Nuclear Power?

Should we go back to Nuclear Power? Nuclear power had been the best source of cheap energy. But this was undermined at the in the late 1990s by several major reactor accidents. Coupled with competition from more-efficient electricity sources, the problems of radioactive waste disposal and unavoidable links to nuclear weapons proliferation. Nonetheless, the apparent certainty of global warming has led the argument that nuclear power is the only viable option left for generating large amounts of energy without emitting greenhouse gases. Could the only way to go forward now be by going back? The Kyoto Protocol was opened for the 11th December 1997 giving targets for reducing carbon emissions for the signitary nations. This required the 40 most industrialized countries (As listed in Annex 1 of UNFCCC1) to cut their greenhouse gas emissions by upto 15%. This has become the first major step into reducing man made greenhouse gas emmiters. Nuclear power has become more and more unpopular with its rising economic costs2 and the gradual fall of fossil fuel prices. Not to mention the Chernobyl accident of 26th April 1986, nuclear power was becoming vastly unpopular in the public sector. ...read more.

It is likely that this will be made from the transport sector alone, which accounts for just over a third of the UK's final energy consumption. As seen in the table below this is very successful compared to other signatories. But the Kyoto protocol is only the first step to solving the climate problem. Not all countries will reach their targets; in fact most of them are considerably off target. To make enough of an impact, there needs to be a massive change on a global scale. A new protocol is set to replace the Kyoto convention in 2009 called the 'Washington Declaration' that will involve industrialised and developing countries. The targets will be much more demanding than before. Although not finalised, with countries struggling to make their current targets, it will require a much more drastic change from all countries to be effective. This change would almost have to be in the industry that pollutes the environment the most, the electricity generation industry. Renewable energy seems the obvious solution, the energy available is infinite and the greenhouse gases produced are negligible. The main renewable alternatives being utilized in the UK are hydroelectric, wind and to a degree solar power. ...read more.

It is a common misconception that renewable energy sources produce no greenhouse gases, when in fact indirectly, they do. Despite the nuclear power plant's high capital costs, as seen in the graph below it is a good contender in the amount of greenhouse gas emissions it releases indirectly. It never has been considered a long-term solution, especially alongside renewable energy; however these studies show that it may well need to be in the near future. In my opinion, Nuclear power is probably a move in the right direction, reducing the amount of fossil fuels used is a great idea, but theres also other ways to generate power, so wind turbines aren't exactly appealing to the eye, but then neither are smoking chimneys, we can definitely use wind generated power, examples of solar power, or even hydroelectric alternatives but judging by these figures it may be case of too little too late. I do not believe that Nuclear power is the long term solution to the problem but in the near future, it may be the that the choice is taken from us. 1 United Nations Framework Convention of Climate Change 2 The cost per unit of Nuclear power was much higher than alternatives in the early 1990s ...read more.