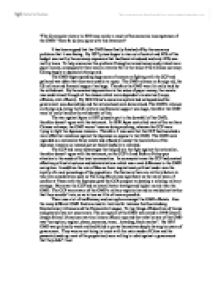 &quot;The Communist victory in 1949 was mainly a result of the economic incompetence of the GMD.&quot; How far do you agree with this statement?

"The Communist victory in 1949 was mainly a result of the economic incompetence of the GMD." How far do you agree with this statement? It has been argued that the GMD been finally finished off by the economy problems that it was facing. By 1937 prices began to rise out of control and 65% of the budget was met by the currency expansion that had been introduced and only 10% was met by taxes. To help overcome this problem Chiang borrowed money and printed more paper money, consequently there was an extreme fall in the value if the Chinese currency. Chiang began to depend on foreign aid. The GMD began spending huge sums of money on fighting with the CCP and gathered vast debts that they were unable to repay. The GMD reliance on foreign aid, the US military and financial support has huge. Therefore the GMD were hit really hard by the withdrawal. By the constant depreciation in the value of paper money, the morale was undermined through all the classes which were dependant on salaries (troops, officials, civil officers). ...read more.

In communist areas the CCP had created effective political structures and administrations which was a vast difference to the GMD corruption. In addition the role of Mao as there inspirational political leader won the loyalty of a vast percentage of the population. Furthermore there are military factors to take into consideration such as The Long March was significant as the many years of conflict at Yanan with the Japanese gave the CCP prospect to develop a winning military strategy. Moreover the CCP had an overall better strategy and higher morale than the GMD. The CCP were aware of the GMD's military superiority and so avoided set battles that they wouldn't win, so as to lose as little of men as possible. There was a lot of inefficiency and corruption amongst the GMD officials. Also the many different GMD fractions lead to rivalries for instance the Guomindang Revolutionary Alliance and the Democratic League. To top things off desertion of troops and generals was not uncommon. ...read more.

Chiang Kaishek was the leader of the Nationalists and the KMT and in the northern expedition gave unity to southern China and gave the nationalists control over the Lower Yangzi. Also he launched a massacre of the CCP, however a failure of this was that Mao Zedong escaped, therefore he didn't eliminate the cancer of communism, furthermore Chiang Kaishek was so occupied with fighting the communists that when Japan invaded he didn't launch an effective attack on them therefore made it easier for the communists to win the civil war and doesn't agree with the statement. To conclude the Japanese surrender meant that the CCP and the KMT started the civil war again. The KMT appeared to have the advantage with more military power and support from other countries, with gave weapons and money; however the CCP won not only down to the economic incompetence of the GMD, but also Mao influence, as under him people were more motivated to fight for the CCP. Also the CCP won because their guerrilla warfare was successful and had well planned and good fighting tactics. ...read more.