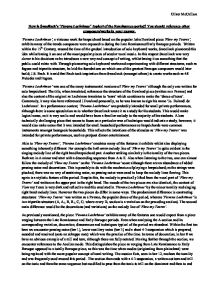 An analysis of Sweelinck's 'Pavana Lachrimae'

How is Sweelinck's 'Pavana Lachrimae' typical of the Renaissance period? You should reference other composers/works in your answer. 'Pavana Lachrimae', a virtuoso work for harpsichord based on the popular John Dowland piece 'Flow my Teares', exhibits many of the trends composers were exposed to during the Late Renaissance/Early Baroque periods. Written within the 15th Century, around the time of the gradual introduction of solo keyboard works, Sweelinck pioneered this idea whilst basing it on one of the most popular pieces of secular vocal music. In this respect Sweelinck was very clever in his decisions as he introduces a new way and concept of writing, whilst basing it on something that the public could relate with. Through pioneering solo keyboard works and experimenting with different structures, such as fugues and tripartite structure, he laid the foundations on which one of the greatest Baroque composers would later build; J.S. Bach. It is said that Bach took inspiration from Sweelinck (amongst others) to create works such as 48 Preludes and Fugues. 'Pavana Lachrimae' was one of the many instrumental versions of 'Flow my Teares' although the only one written for solo harpsichord. ...read more.

Even when analysing the A section and its corresponding variation, decoration, dissonances and techniques typical of the period are abundant. Within the first ten bars we encounter passing notes (bar 1), lower auxiliary notes (bar 3) and a short 4-3 suspension which is prepared, sounded and resolved (onto an �chappe note) which was the practice of the time. In terms of decoration, in bar 8 we have an obvious example of a trill and turn, although these are fully notated. Moving further through the section, we encounter references to the Aeolian mode. This distinguishes the piece as verging from Late Renaissance to Early Baroque opposed to a totally Baroque piece, as this was the time when modes (originating from plainchant) were being replaced with the more popular concept of tonal writing. The musica ficta, seen in bar 12, anchors the tonality and was frequently used around this period. The section then ends with a 4-3 suspension, a written out turn and trill on the tonic and then the same sequence but modified to pass from the tonic to trill on the dominant and then to end back on the tonic. ...read more.

As to performing what Sweelinck intended, in the case of an 'authoritative' performance, it is frequently mentioned that 'Flow my Teares' was the piece most used as a stimulus for improvisation at the time, and therefore it is possible that so many variations existed on the melody that the piece Sweelinck composed and the piece the editor heard were totally different. Also, taking into account the possibility of the piece being written as a study, it is more than possible that students took the piece home and imprinted some form of their personalities onto it. Things such as suspensions could equally have been intended by Sweelinck or added as an extra flourish by an overzealous student. Slightly less obvious, but no less important are added mordents (upper and lower - bars 35, 44,), decorative runs (bar 60) and spread (arpeggiated) chords. As a result, it is virtually impossible to realise an 'authoritative' version. In conclusion, Sweelincks 'Pavana Lachrimae' exhibits an abundance of Renaissance and Baroque traits. It successfully assimilates both periods into one piece, evenly representing them both, creating an imaginative and expressive work that is still remembered and analysed six centuries on. ?? ?? ?? ?? Oliver McCallion ...read more.