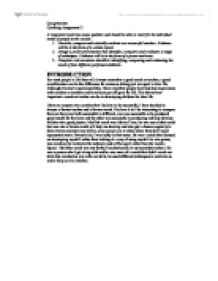 A competent coach has many qualities and should be able to cater for the individual needs of people in the session. 1. Describe, compare and critically evaluate two successful coaches. Evidence will be in the form of a written report. 2. Design a poster presentation that identifies, compares and evaluates a range of techniques. Evidence will be in the form of a poster and notes. 3. Complete 4 observations checklists identifying, comparing and evaluating the needs of four different performers/athletes. INTRODUCTION For most people in life they will always remember a good coach or teacher; a good coach/teacher can be the difference for someone taking part ion sport in later life. Although I haven't experienced this, I have read that people have had bad experiences with coaches or teachers and have been put off sport for life. This shows how important a coach or teacher can be in developing children for later life. I have to compare two coaches that I believe to be successful; I have decided to choose a former teacher and a former coach. I believe it will be interesting to compare them as they were both successful in different, one was successful as he produced good results for the team and the other was successful in producing and help develop children into good players. My first coach was Adrian Tame, he was my cricket coach but was also a Devon coach will help me develop and also get a chance regularly to show Devon selectors my ability, some people are at clubs where they don't send representatives to Devon trials, I was lucky in that sense. He was a coach that focused on developing my skill rather than looking at a way of using my skill to win games, you could say he looked at the technical side of the sport rather than the mental aspect. My other coach was my football teacher/coach at my secondary school. ...read more.

I said earlier I believe that both coaches have good communication skills, but they do it in different styles. Adrian communicates through his past experiences and in a very correct fashion, being a qualified Devon coach he is very much a 'textbook style coach' everything is done correctly and he likes to portray that attitude when he speaks and demonstrates skills. He uses communication as a way of enhancing and developing skill, he also uses in conjunction with other methods of coaching like visual demonstration, he will use communication of breaking down a skill so that the performer understands every part of the skill, he basically explains the positive and negatives of using certain skills so you understand what he knows, it is way of passing his knowledge across to you. In contrast Jason was using his communication skills in a different way, rather than using them to make you understand something he was using them to inspire you. You didn't always have to understand what he was saying he was using them for you to get that feeling that you want to perform well. You weren't necessarily learning anything when he spoke but you got the feeling that you wanted to perform to the best of your ability just to impress him. He is one of those people that when he started speaking people just sat and listened as he always had something you wanted to hear. It was very morale boasting and it didn't necessarily improve you as a player but it got the best out of you, so in a way it did improve you as it helped you to reach your full potential, while Adrian used to communication to try increase your full potential. You would struggle to find a way to improve both coaches' communication skills, as both are very effective in the way they use communication and both are successful with their methods. ...read more.

Juan Juan isn't at a particular high standard of football; he plays mostly for fun, and doesn't really have a real ambition of playing football professionally. He does have a quite a bit of talent but isn't dedicated and regularly skips training to do other things. * CRITICISM: - He needs to be told that if he wants a place in the team he needs to be committed, it is unfair on the staff and his team-mates if you only turns up when he wants and that if he wants to play in matches he has to turn up at training. * ENCOURAGEMENT: - Although he is disruptive he does have a talent and he needs to be encourage to keep going as if he practices and became dedicated he become a good player. Roberto He has just started at his sport and so everything is still new and he is still learning the art of the sport, there isn't great deal of skill involved in triathlon's a lot is based upon fitness and so he must have a lot of dedication if he wants to reach a good level. Seeing as he has just started the sport he will have a lot of enthusiasm for the sport and so will probably want to do a lot more training than someone who has been doing it for number of years. * GUIDANCE: - He needs to know the correct technique as her is still learning the sport and doesn't really have much experience to draw on, he needs someone who knows what there doing to explain or demonstrate exactly how to do it. * GOAL SETTING: - Being new to the sport he want have a great deal of expectations but in order to track his improvement he needs to set targets or goals to achieve by doing this he can see how much progress he has made. ...read more.