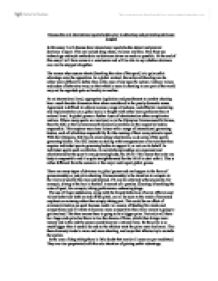 Discuss the role international sports bodies play in detecting and preventing deviance in sport In this essay I will discuss how international sports bodies detect and prevent deviance in sport. This can include drug abuse, violence and bias. How they use technology and such methods to cut deviance down as much as possible. At the end of this essay I will have come to a conclusion and will be able to say whether deviance can ever be stopped altogether. The reason why anyone cheats (breaking the rules of the sport) is to gain unfair advantage over the opposition. In a global context, the notion of cheating can be rather more difficult to define than in the case of any specific culture. Cultural values and codes of behaviour vary, so that which is seen as cheating in one part of the world may not be regarded quite so harshly in another. At an international level, appropriate legislation and punishment to combat cheating has a much broader dimension than when considered in the purely domestic sense. Agreement is difficult to achieve across a range of cultures, and effective monitoring and implementation on a global scale is fraught with rather more problems than at national level. ...read more.

This then means there is going to be a bigger prize. Not only will there be a huge cash prize but there is also the chance of fame, which then brings more money and in the end the person could become a national hero. So the prize is so much bigger than it used to be and so the athletes want the prize more and more. This then obviously leads to more and more cheating, and ways that athletes try to swindle the system. In the case of drug taking there is little doubt that nearly all cases are pre-meditated. They are also perpetrated with the sole intention of gaining unfair advantage. Although there is debate surrounding this topic, the present rules are quite clear and people found to be in breach of them have little to offer in their defence. Or have they? Recent cases have highlighted errors in testing procedures as well as instances where it is claimed that illegal substances have been created naturally in an athletes own body. It is therefore becoming increasingly difficult for sports governing bodies to frame effective legislation in this sphere. ...read more.

Biased behaviour on the part of sports fans is an acceptable part of supporting one's team or individual sportsperson. However when such behaviour and racial and other personal remarks are targeted at particular individuals, it is generally regarded as reprehensible. The biased behaviour of officials is, on the other hand, always unacceptable. Care must be taken to differentiate between behaviour that is intentionally biased and that which is perhaps the result of genuine error, or simply a differing point of view. This is quite difficult for governing bodies to prevent and the best way that they can do so is to monitor officials performances and if the governing bodies think they have been biased on more than one occasion they can get rid of them. Sport was once run by largely amateur officials whose middle-class morality and sense of fair play made the rules. Today, sports administrators working globally have to accommodate a range of moralities. They must also contend with largely professional performers, political influence, commercial and media interests and with common law. This leaves sport governing bodies with a very difficult task indeed. Deviance has been in sport since day one and will continue to do so for a very long time to come. ?? ?? ?? ?? ...read more.