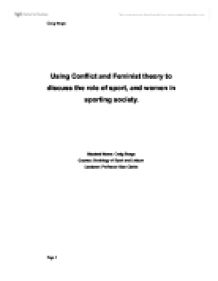 Using Conflict and Feminist theory to discuss the role of sport, and women in sporting society.

This means that people with power can use sport to promote attitudes and connections that enable them to sustain that authority and privilege. However, social class doesn't play so much of a larger part of sport today as it did in the past. During the twentieth century, there have been improved social conditions, work is less demanding, fewer hours are worked, medical care has improved as has people's diets. There is also better transportation, more labour saving devices such as machines and people now have more time to spend on recreation and sport. After World War two there was generally a better standard of living and more money for leisure. More people are able to play sport and the media reflects society's interest in sport because these days the class division doesn't really exist in sport as sports have now become available to all those who want to take part in them. If progress is to be made then Conflict theory suggests that it will have to be at the expense of another group - maybe the white majority or the middle-upper classes. However, it may be that these groups are preventing this from happening as the upper classes are most likely to have more money and influence so they make more money out of sport therefore will prevent progress being made for the equality in sport as it will disadvantage them. ...read more.

They have social networks made up of other women who also have the resources to maintain high levels of sport participation. (J.Coackley 2003, page 336) Women who have been brought up in these families often have played sports during and since their childhoods and have attended schools with good sports programs; however, they have experienced the same constraints as their lower-income counterparts. Their opportunities are much greater than those of lower-income women, even though they may not be equal to those of upper-income men. (J.Coackley, 2003, page 338) However, these theories have their weaknesses. Both the conflict theory and feminist theory under-estimate the importance of other factors when it comes to explaining how people relate to others, organize social life and especially in terms of discrimination in sport. These other factors include race, ethnicity and age. Conflict theory also underestimates the value of gender and s****l orientation. Also the feminist approach under estimates the importance of social class, disability, religion and nationality. In conclusion, both the feminist and conflict theory produce good arguments about sports role in society; nonetheless, there is also evidence to show that they do not touch on other factors which are just as significant as their views. To gain a true understanding of sports role in society and also relate it to women in sport then all the theories should be revised before making an accurate opinion. ...read more.