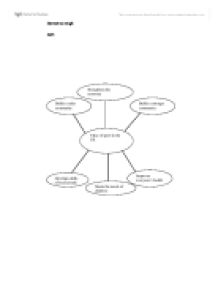 Explain the value of sport in the UK. How does sport build a safer, stronger community?

AO3 How does sport build a safer, stronger community? Sport helps to build a safer and stronger community by trying to get the children and teenagers off the streets by organising sporting events such as midnight soccer leagues throughout the week and weekends. Young people will enter a team into this league and compete against teams from their own community and other communities throughout the week and weekends. In my own community the midnight soccer league is a cross-community venture. This helps to build a stronger safer community because members of the Catholic and Protestant communities are getting along and enjoying themselves. My community also has a lot of GAA clubs which also take young people off the streets and gives them a chance to make a name for themselves in the GAA. It also gives them something to focus on and something to look forward to. The GAA is a voluntary organisation, so the men and women that are coaching and managing the young people are all doing so out of sheer enjoyment and love of the sport. The GAA and the midnight soccer scheme helps to take young people of the streets were they are likely to end up involved in anti-social behaviour. ...read more.

Develops the skills of local people In many communities men and women with no sporting experience feel obliged to take the local teams voluntarily. In my community this mainly happens in local GAA clubs as I have already said the GAA is a voluntary organisation, these men and women have to quickly pick up skills such as entering the teams for leagues, organising games, competitions trips away etc. they have to pick IT skills to deal with these events. These are the things that are taken for granted by most of the young people/players all they have to do is show up to the trainings and matches while the local men and women put a lot of effort in the 'behind the scenes work' as it is known. The GAA clubs form a committee with a chairman, secretary, treasurer. There is a separate committee for the juveniles and the seniors, again these vacancies are voluntary and require a lot of work in their spare time. However this sounds like a lot of hard work and no fun but these voluntary workers gain and develop skills, they also get a satisfaction from winning, running and hosting successful tournaments. ...read more.

I think that sport can improve every ones health because the professionals in the sports are role models to a lot of young people this means that the young people aspire to be like their role model and they know that if they are over weight and unhealthy they will not achieve anywhere close to the success of their role model. In the past decade all of the top sports have brought in specialist nutritionists to make sure the performers are eating healthy because they believe that their performances will increase with a healthier lifestyle. Not everybody can afford these special nutritionists but gym's such as JJB and LA fitness offer specialist nutritionists advice in there gym's at a reasonable cost, they run programmes were you can set yourself a personal goal to lose weight and you and the nutritionist aim to achieve that goal in the deadline set. Young people today who wish to become big in a sport have to watch what and when they are eating, this could have a knock on effect on their families. Their families could then begin to watch what and when they are eating and could also improve their health. ?? ?? ?? ?? Dermot mc veigh ...read more.