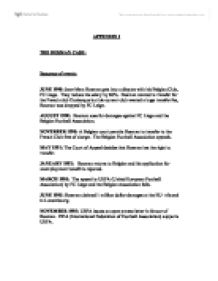 APPENDIX 1 THE BOSMAN CASE: Sequence of events: JUNE 1990: Jean-Marc Bosman gets into a dispute with his Belgian Club, FC Liege. They reduce his salary by 60%. Bosman wanted to transfer for the French club Dunkerque but his current club wanted a huge transfer fee, Bosman was dropped by FC Leige. AUGUST 1990: Bosman sues for damages against FC Liege and the Belgian Football Association. NOVERBER 1990: A Belgian court permits Bosman to transfer to the French Club free of charge. The Belgian Football Association appeals. MAY 1991: The Court of Appeal decides that Bosman has the right to transfer. JANUARY 1992: Bosman returns to Belgian and his application for unemployment benefit is rejected. MARCH 1995: The appeal to UEFA (United European Football Association) by FC Liege and the Belgian Association fails. JUNE 1995: Bosman claimed 1 million dollar damages at the EU- tribunal in Luxembourg. NOVEMBER 1995: UEFA issues an open protest letter in favour of Bosman. FIFA (International Federation of Football Association) supports UEFA. The Football world before Bosman. The Bosman case changed the nature of player's transfers in the EU. Prior to the Bosman saga, football clubs had considerable employment control over their players. The players were registered with the clubs, when a player was moving or transferring from club to another it was the registration document that was exchanged between the clubs involved. In most transfers a fee was demanded from the club which held the registration document of the player concerned. The transfer fee, and also the inability of players to move freely between employers as and when the liked, marked them out as different from many other sort of employees. Until 1960's players in England had to put in a transfer request if they wanted to move clubs. If the club refused to allow a player to move, the player would be tied to the club as long as his wages were maintained at least to the level of his previous contract. ...read more.

The case went to FIFA, The world Football Governing Body, who concluded that the Bosman ruling applied to the transfer since both clubs were members of the national football associations located in the European Union (6). Celtic lost their claim; the decisions had sound legal bases (7). Every other week we see the effect the Bosman ruling has bought, loss of valuable income for football clubs, it has been estimated that over �98 million immediately following the ruling. Clubs took advantage of the open market and many bought overseas players, which lead to increased costs, because the ruling only applies to out of contract players, a fee is still paid by clubs to buy players who are still in contract. This can be seen by the vast amount of money which is still being paid by clubs to buy top players (8) The bargaining power from Post-Bosman is probably gained by top players; they can demand huge increased salaries (9). Whilst some players are exercising their rights to see out their contracts to get a free transfer, contrary to the wishes of their club who may be desperate for a sale (10). (6) The European Commission has also confirmed that the Bosman ruling applies to the John Collins transfer and that a transfer fee is not payable (reported in the THE HERALD, 18 April 19970). (7) cf the views of P.Spink, "Post-Bosman Legal Issues" (1997). (8) The former Arsenal striker, Nicholas Anelka, transferred to Real Madrid for �21 Million in July 1999, and Luis Figo transferred from Barcelona to Real Madrid for a fee of �37 Million, smashing all previous records. (9) A good example of this is when Manchester United in 1999, re-sign their captain Roy Keane. The Club eventually broke their wage structure in order to keep the player. (10) An obvious example is Paul Ritchie of Hearts who made it clear at the beginning of the 1999/2000 season that he would not sign a new contract with his current club at ...read more.

Also the fan base has increased by the arrival of foreign players. Although the English national team is still quite poor. Everyone and every company must learn to adapt to the new world order. The transfer fee system involves an infringement of a player's fundamental right to change clubs at the end of his contract. So why cling on to a system which violates the fundamental rights of workers? APPENDIX (1-5) 1) Case 66/85 Lawrie-Blum v Land Baden - Wurttemburg the ECJ suggested that the essential characteristics of a worker are some one who performs services for another during a certain period of time under the direction of another in return for remuneration. 2) Ruling in Laymen Terms. The ruling in the Bosman saga is that the transfer fee for players with expired contract aborted and clubs may not ask for such a development fee of any kind. In addition, clubs may use as many players as they wish as long as they come any 'Member State'. 3) In Walgrave (1974) judgement it was held that Article 48 not applies to the action of public authorities but also extends to private rules regulating gainful employment. 4) In Dona (1976) the court pointed out that sport, in so far as it constitutes an economic activity, is subject to Community Law. 5) Kempf v Staatssercretaris van justitie (case 139/85) Kempf was part-time worker as a teacher in The Netherlands from 1981-1982. During this time see was in receipt in supplementary benefits, in 1981 November she applied for a Dutch residence permit. She was refused on the grounds as not being a favoured 'EC Citizen' since her income was not sufficient. He case was challenged and then referred to ECJ and the question whether a part-time worker, such as Kempf, whose income was below subsistence level, and hid not have any other means of financial support, was a 'Worker' entitled to benefit under the Community Law. The courts decision was that he was. It was held of the fundamental freedoms and must, as such, be defined broadly. ...read more.