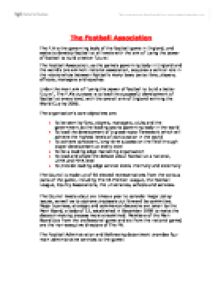 The Football Association The F.A is the governing body of the football game in England, and seeks to develop football at all levels with the aim of 'using the power of football to build a better future.' The Football Association, as the game's governing body in England and the world's pre-eminent national association, occupies a central role in the relationships between football's many basic parts: fans, players, officials, managers and coaches. Under the main aim of "using the power of football to build a better future", The F.A's purpose is to lead the successful development of football at every level, with the overall aim of England winning the World Cup by 2006. The organisation's core objectives are: * To be seen by fans, players, managers, clubs and the government as the leading sports governing body in the world * To lead the development of a grass-roots framework which will achieve the highest levels of participation in the world * To achieve consistent, long-term success on the field through player development at every level * To be a leading-edge marketing organisation * To lead and shape the debate about football at a national, UEFA and FIFA level * To provide leading-edge service levels internally and externally The Council is made up of 92 elected representatives from the various parts of the game, including The FA Premier League, the Football League, County Associations, the universities, schools and services. ...read more.

Meanwhile, The FA is investing �12 million over four years in a custom-designed IT system that will link the football community and ease the administration burden on clubs, leagues and County FA's. As part of this, a League Administration is already available on the Internet, while in the near future, all County FA's will be operating under a new County Administration System. 4. Developing Women's Football Women's football is already the biggest sport for women in this country and The FA is putting the structures in place to help it expand further, with the hope of a doubling of the number playing within the next decade, if not sooner. The FA also has plans to create a professional league for women 5. Developing Leagues, Competitions and Clubs This means developing everything from The FA Trophy and FA Vase to ambitious plans for developing hundreds of what are being called "community clubs". These are sort of "super-clubs", each with at least ten teams, ranging from junior to women's and senior teams. "It is the sort of club where you can start as a youngster, playing in a junior team, and go all the way through to playing as a veteran", explains Stone. Such clubs will also have a social area or bar, where the life of the club can continue before and after the game. ...read more.