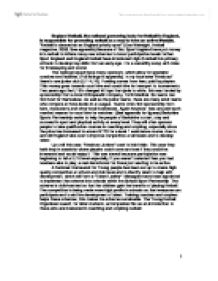 England Netball, the national governing body for Netball in England, is responsible for promoting netball as a way to have an active lifestyle. "Netball is classed as an England priority sport" (Lisa Wainright, Netball magazine, 2005, See appendix) Because of this, Sport England have put money into netball to initiate many new schemes to boost participation levels further. Sport England and England Netball have introduced High 5 netball into primary schools to develop key skills from an early age. It is a versatility setup with roles for timekeeping and scorer. The national squad have many sponsors, which allow for specialist coaches and facilities, (Full listings in appendix). In my local area "Newbury" there is one junior club (U11-U16). Funding comes from fees, paid by players. This money goes towards court hire and coach hire for transport to tournaments. Two years ago the U16's changed kit tops from jade to white, this was funded by sponsorship from a local Orthopaedic company, Forth Medical. So teams can find fund for themselves. As well as the junior teams, there are many adult teams who compete at three levels in a League. Teams often find sponsorship from bars, restaurants and other local businesses. Again however, fees are paid each months/ season for court hire for matches. (See appendix for figures) Berkshire Sports Partnership works to help the people of Berkshire to start, stay and succeed in sport and physical activity at every level. ...read more.

In Primary schools, children play High 5 netball, and at secondary school the full 7-a-side game both curricular and extra curricular. This year there is no county Netball, it is too expensive to run and it doesn't develop talent of those who just missed out on a place. The new set up is a 10-year development programme for committed athletes to improve standard. The levels are shown in the diagram, players work up the ladder and ultimately make a national squad. (For details of the criteria at each stage see appendix) England netball rules state that High 5 netball should b the only netball for primary schools; teams can be female, male and mixed. In secondary school boys can play netball, but only in curriculum time, and they must be under qualified teacher supervision. Ian Root used to coach the England Netball Men's National Squad. He was concerned with the development of men's netball. Although the men's team played internationally, the sport is very low profile. In Newbury there is a small opportunity in primary school High 5 tournaments. At Park House full course GCSE PE students do a 6-lesson netball session, this is mixed. But, from the age of 11 and up, there is no real opportunity for men to play netball. Girls can play competitively for primary and secondary school and then club from age 11 and upward, starting at Newbury Juniors then progressing to adult teams. ...read more.

This stage has replaced to England potential camps. From here they are nominated to attend a screening day for the next level. The next stage of development is the 2 Talent squads. The main difference is the training to compete element. There are 20 players selected at each age group, U17 and U19. There are national training weekends from September to January, and then in January squads are selected to compete in Netball Europe championships. As well as the weekends, technical support is provided, plus 2 hours of coaching within one hours travel per week. The England Netball Athlete Scholarship scheme (TASS) is the next extension of the talent squads; all U21 and U19 squad players and super league players are nominated. Future national squads will b through observations made at Super League competitions. The focus is to put as many into Super League squads as possible. The final stage of development is the National squad; players train to win. Players can be selected for this when aged 16 or over. Players are provided with fully integrated and individual training program with a high responsibility of athleticism. Competition squads for international events are selected from here. England National Squad official Sponsors Official Snack Food England Netball Kit Sponsors Official Shoe Sponsor Official Ball Sponsor National Schools Championships Sponsor London High 5 Project Sponsor Official Post Supplier Netball UK Challenge Cup U19 Netball Championships 2006 Sponsor Schools Membership Sponsor ?? ?? ?? ?? 1 ...read more.