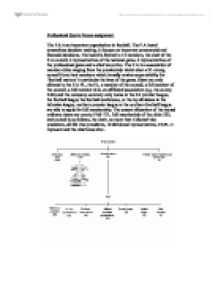 professional sports person.There are a number of different situations that can affect and influence a person's behaviour in sport.

Professional Sports Person assignment The F.A is an important organisation in football. The F.A board streamlines decision making, it focuses on important commercial and financial decisions. The board is limited to 14 members, the chair of the F.A council, 6 representatives of the national game, 6 representatives of the professional game and a chief executive. The F.A in a association of member clubs ranging from the premiership which elect a 91-strong council from their members which broadly retains responsibility for 'football matters' in particular the laws of the game. Share are only allowed to the F.A PL, the FL, a member of the council, a full member of the council, a full member club, an affiliated association (e.g. the county FAS) and the company secretary only teams in the FA premier league, the football league the football conference, or the top divisions in the Isthmian league, northern premier league or the southern football league are able to apply for full membership. The present allocation of the issued ordinary shares are county FAS-771, full membership of the clubs-233, and council is as follows, the chair, no more than 6 elected vice presidents, all life vice presidents, 10 divisional representatives, FAPL-5 represent and the chief executive. ...read more.

used to beat his opponents which gave him an unfair advantage and enabled him to win the final, Ben Johnson may have felt pressure to win and took the drugs because he didn't want to let his family and friends down, also his coach may have advised him to take them because he was not fast enough. The bad influence in the Tony Adams clip is alcohol, he became an serious alcoholic, this could have been because of the pressure of being a 1st team player at arsenal at only 17, also it could have been the pressure from family or family members being alcoholics which could of influenced him to being a alcoholic. In the Di Canio clip he was being r****t which is unacceptable to the game, he claimed to be a fascist, he may have done this due to his upbringing because his family may have been fascist as well and may have influenced him and this may have influenced to act the way he did. England Rugby Team England is standing in two lines clapping Wales off the pitch. This shows goods sportsmanship and a lot respect towards Wales its showing good ethics and values in sports. ...read more.

Also organise a fund raising day for the local people and the children to come to the club and take part in enjoyable activities, and hold talent scouting days to see if there's any good unsigned talent that could become a team player. Lottery Funding The club will get lottery funding and use the money on improving the facilities that the club has such as repairs to the stadium, pitch repairs and better training equipment. Sponsorship The club will get a contract with a good sponsor and use there money to pay the wages of the players and staff and the money will also be used to promote the club. Loans The club will get a loan from the bank and will use that money wisely to buy players and strengthen up the team which will then bring in the fans and we will make the money back through ticket and shirt sales. Prize Money If the club wins competitions and tournament we will get money and the money will be used on refurbishing the changing rooms and the clubs transport e.g. coaches. Media Interest The club will advertise our self to the public and make the club been a recognisable place. We will put our advert in every kind of media such as the news paper, the radio, posters and even T.V. ...read more.