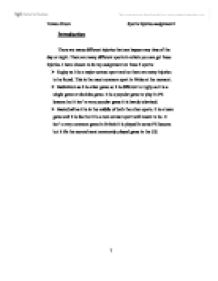 Introduction There are many different injuries that can happen any time of the day or night. There are many different sports in which you can get these injuries. I have chosen to do my assignment on these 3 sports: > Rugby as it is a major contact sport and so there are many injuries to be found. This is the most common sport in Wales at the moment. > Badminton as it is a fast game so it is different to rugby as it is a single game or doubles game. It is a popular game to play in PE lessons but it isn't a very popular game it is barely televised. > Basketball as it is in the middle of both the other sports. It is a team game and it is fast but it is a non contact sport well meant to be. It isn't a very common game in Britain it is played in some PE lessons but it i9s the second most commonly played game in the US. Task 1 There are many intrinsic and extrinsic factors to affect a player's game on any given day. First rugby. It is a major contact sport, which means there are many extrinsic factors, which can affect the game of a player, which in its turn affects the team. ...read more.

But interlink this with pour practice there isn't much chance that you could even play. For badminton muscle imbalance is very bad to have but with pour practice there is only injuries to come from playing in theses sorts of situations. There is only time out to have in this sort of situation otherwise you may not be able to play again for a while. Task 2 In rugby there can be a lot of injuries. For most of these injury there is either equipment that can either stop the injury from happening or the coach can train the players in a special way so that the injury is either less damaging or virtually non-existent to the player. Here is a list of the injuries possible for a player to have, which is almost every possible injury, and how the coach or the equipment stops or restrict the injury. These are the most common injuries in rugby: > The head- player where a hat called a scrum cap which softens a blow and just protects the head and the ears. > Neck + shoulders- you can have pads which are a sort of shock absorbers which takes the main of the blow and restricts injury and they also make you look bigger so it intimidates the other team. ...read more.

This is common in badminton because there is a lot of swinging, as it is a racket sport. And as it is fast as well your elbow doesn't have enough time to deal with the shock of the swing when the player go's for the next shot. This injury is common in most rackets sport as they are all fast games and the Synovial fluid doesn't have chance to recuperate for before the next shot. In basketball the most common injury is runner's knee and dislocations in the thumb. Runner's knee is very common in any major league basketball player as there is a lot of strain on the knee with the running and jumping in the air. The thumb is dislocated with the ball travelling at great speeds the thumb is easily broken. Evaluation In evaluation to this assignment I have proven that there is to some extent that the injuries in different sports like rugby to badminton. Rugby tends to have more major injuries to badminton, as it is a contact sport. Basketball is dangerous by the fact that it is easy to brake bones in the body e.g. fingers. It may not be a contact sport but it is still dangerous. In conclusion that contact sports are more dangerous but they don't all ways have more injuries to the non contact sports, which are faster, and they have different injuries. Tomos Green Sports injuries assignment1 7 ...read more.