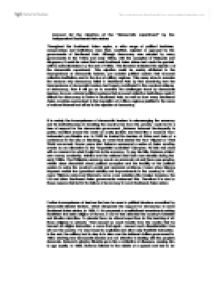 Account for the rejection of the &quot;democratic experiment&quot; by the independent Southeast Asia states.

Account for the rejection of the "democratic experiment" by the independent Southeast Asia states. Throughout the Southeast Asian region, a wide range of political doctrines, compromises and institutions were tried, modified, rejected or opposed by the governments of Southeast Asia. Although democracy was adopted by many governments in the 1940s and early 1950s, with the exception of Malaysia and Singapore, it could be noted that most Southeast Asian states had made the gradual shift to authoritarianism by the end of 1980s. This therefore indicated the rejection of the democratic experiment. This rejection could be mainly attributed to the incompetence of democratic leaders, pre-colonial political system that favoured collective institutions and to the rise of military regimes. This essay aims to examine the reasons why democracy failed in Southeast Asia by first examining how the incompetence of democratic leaders had largely contributed to the eventual collapse of democracy; then it will go on to examine the challenges faced by democratic leaders; how pre-colonial political systems that favoured collective institutions made it difficult for democracy to thrive in Southeast Asia; as well as how many Southeast Asian countries succumbed to the imposition of military regimes justified in the name of national interest had all led to the rejection of democracy. ...read more.

Sukarno's playboy lifestyle gave him a collection of diseases, causing him to age rapidly. In 1965, Sukarno faltered in the middle of a speech and had to be helped from the platform before the eyes of shocked thousands. The display of weakness by the Sukarno gave rise to the rebellion of many, and the military had to intervene several times. Gradually, people no longer support democracy as much as respect for the military leaders who were quick to put down any dissent. Furthermore the governments that faced unfavourable circumstances such as challenges to central authority including ideological differences, communist and ethnic insurgencies were generally unsuccessful in implementing democracy in their countries. The limited amount of unity that was shown while the Indonesians were fighting the Dutch disappeared after the war was replaced by petty bickering between political factions. Some were divided along the religious lines between those who wanted an Islamic state and secular state. Between 1949 and March 1957 there were seven governments each trying to maintain internal security and develop the economy; this eventually paved the way for Suharto, a military general to stage a coup to take over from Sukarno and implement an authoritarian regime. In Burma, opponents of the U Nu regime rose up everywhere starting with two communist factions. ...read more.

When the liberal democratic governments failed to provide political stability and economic growth, the military, which have been lurking in the background for some time after independence, pounced to the front to assume political control. However, not all states rejected democracy as noted in Malaya and Singapore, where ethnic issues and communist threats were dealt with before given independence, which thrived under democracy. When Malaya was given independence in 1957, the country was almost free from communist influence except some communist guerrilla fighters in the Thai-Malaya border. When emergency was over in 1960, the country was firmly in the hands of the alliance party, a coalition government dominated by the united Malay national organization (UMNO), Malayan Chinese party (MCP) and the Malaya Indian congress (MIC). Similarly in Singapore, the communist influence was reduced to the minimum after operation Coldstore in 1963 before Singapore merged with Malaysia. The 1964 racial riots were also effectively dealt with before Singapore gained independence from Malaysia in 1965. In countries where the communist threat and ethnic insurgencies were prevalent, democracy would usually not survive for long after independence as the governments were usually fighting hard against these forces besides pushing back the military, which harboured the ambition of taking over the civilian governments. On the other hand, democracy usually work best in countries like Singapore and Malaysia, where these divisive issues were settled by the colonial master before they were given independence. ...read more.