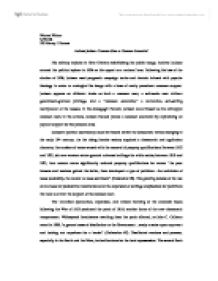 Warren Winter 3/23/04 US History I Honors Andrew Jackson: Common Man or Common Scoundrel His military exploits in New Orleans embellishing his public image, Andrew Jackson entered the political sphere in 1824 on his appeal as a national hero. Following his loss of the election of 1824, Jackson used pragmatic campaign tactics and rhetoric infused with popular ideology in order to undergird his image with a base of newly prominent common support. Jackson appears on different levels as both a common man, a self-made man without government-granted privilege, and a "common scoundrel," a calculative, self-serving manipulator of the masses. In his demagogic rhetoric, Jackson touts himself as the archetypal common man; in his actions, Jackson instead proves a common scoundrel by capitalizing on popular support for his personal ends. Jackson's political ascendancy must be framed within the democratic trends emerging in the early 19th century. As the rising frontier society acquired a democratic and egalitarian character, the number of voters waxed with the removal of property qualifications. Between 1812 and 1821, six new western states granted universal suffrage for white males; between 1810 and 1821, four eastern states significantly reduced property qualifications for voters. "As poor farmers and workers gained the ballot, there developed a type of politician...the technician of mass leadership, the caterer to mass sentiment" (Hofstadter 65). ...read more.

Secretary of State Martin Van Buren led the Albany Regency, the Jacksonian political machine founded on the spoils system, and diffused the spoils system on the national scale. Jackson's six-member cabinet was largely mediocre, and he came to rely on his extra-official Kitchen Cabinet of about thirteen unofficial advisors. Jackson ultimately traded competency in office for his self-empowerment, despite the idealism in which he cloaked the principle. The consequences of Jackson's spoils system demonstrate a discontinuity between his theory and his practice as a soi-disant hero of the common man, a pattern established early in his presidential tenure. Jackson further belied his ideological support for states' rights with his militaristic response to South Carolina's nullification of the Tariff of Abominations. In 1828, Congress had increased the tariff on dutiable goods to 45%. The tariff found support in the Northeast, where New England factory owners benefited from its protection from foreign competition. The South fervently opposed it, however, for its negative effects on southern consumers and exporters alike and on the demand for cotton in England. Southerners called it the "Tariff of Abominations," and by the compact theory of states' rights as reworked in John C. Calhoun's South Carolina Exposition and Protest of 1828, South Carolina defended the nullification of the tariff. Jackson took personal offense to this general political declaration when he wrote to Calhoun: He allowed that he had always considered Calhoun a virtuous man... ...read more.

It is, however, biased to conclude that Jackson was in inexorable pursuit of his own power. His impetuosity and his tendency to effusively reduce political and economic issues to a level of personal offense commonly played into his decisions as president. Regarding the issue of the national bank, Hofstadter demonstrates that "to the frontier duelist the issue had instantly become personal" (78). Burstein weakens the simple argument that Jackson was purely manipulative: Jackson "possessed a strong intuitive sense that [he was] needed to prevent corruption" (224). The self-important Jackson shared the irrational passions of the common man and used his support to serve not only his interests but these shared passions. As Jefferson had furthered his power by pragmatically adopting the ideology of the Federalists to defeat their influence, Jackson furthered his by adopting popular ideology to appeal to the common constituency. The results of his spoils system, his veto of the BUS's recharter, and his response to the nullification crisis prove that he often acted in self-interest; his popular appeals, however, did not result from calculation and craft. Impetuous and thoroughly convinced of a virtue in his decisions, he failed to exert his power objectively. The actuality and consequences of Jackson's policies refute the abstraction of Jackson as a symbol of the common frontiersman. In theory, Jackson was a common man; in practice, a common scoundrel. ...read more.