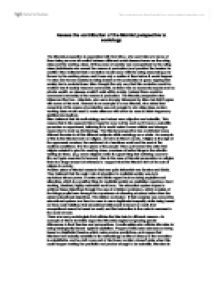 Assess the contribution of the Marxist perspective to sociology

Assess the contribution of the Marxist perspective to sociology The Marxist perspective is associated with Karl Marx, who saw history in terms of there being an over all conflict between different social classes known as the ruling class and the working class. All the power of society was monopolized by the ruling class (individuals who owned the means of production) and provided the tension for conflict. Marx believed that a revolution would occur with the ruling class being over thrown by the working class, and it was only a matter of time before it would happen. He also saw human society as being based on the production of good, arguing that society had a material base. Marx thought the only way that this revolution could be avoided was if society became communist, as there was no economic surplus and no private wealth, so classes couldn't exist within society. ...read more.

Marx put forward the claim that religion existed to give the working class promises of better things in the afterlife waiting for them, (e.g. some religions make it a good thing that suffering occurs in life, as it gets rewarded in heaven). Also in the case of Marxist perspective on religion there is a large amount of evidence to support what the Marxist view of the role of religion in society. Another piece of Marxist research that was quite influential was Bowles and Gintis. They believed that the major role of education in capitalist society was is to reproduce labour power. Bowles and Gintis regard work as being exploitive and alienating, which is a positive thing for capitalist society as capitalism requires a hard working, obedient, highly motivated work force. The education system hopes to achieve these objectives through the use of a hidden curriculum, which consists of the things pupils learn through the experience of attending at school rather than the stated educational objectives. ...read more.

Marxism is also criticised for economic determinism, which is seeing individual's behaviour as determined by the economic system around them. This view neglects to show the existence for individuals having free choice. In defence of this, Marxists state that the theory isn't economically deterministic, but just raises the point that individuals and groups in cultures have to make their own history, but the economic structure that surrounds them is a main factor in determining which context the process takes place. Marx wanted to prove that the revolution would happen, as he wanted society as a whole to become communist. Also if the revolution did happen it would support his perspective and prove that he was right in his research in to the ruling class and the working class. The revolution would prove Popper wrong in that he had stated he thought this part of Marx's theory was the only unfalsifiable part of it, as it could happen at anytime and hadn't been precisely laid out. If the revolution were to happen Marx would be seen as scientific. ...read more.