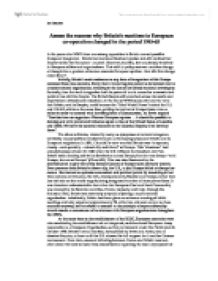 Assess the reasons why Britain's reactions to European co-operation changed in the period 1945-63.

Assess the reasons why Britain's reactions to European co-operation changed in the period 1945-63 In the years after WW2 there was strong opposition in Britain toward possible European integration. Britain had not faced n**i occupation and still retained her Empire unlike her European ' cousins'. However, by 1961, she was deeply involved in European affairs and organisations. This shift in policy was not a sudden change of thought but a gradual adherence towards European opinion. How did this change come about? Initially, Britain's main resistance to any form of integration within Europe stemmed from two concerns, firstly that it would require power to be handed over to a supra-national organisation, resulting in the loss of her prized national sovereignty. Secondly, fear that such integration had the potential to cut across her economic and political ties with its Empire. The British Empire still stretched across the world and Imperialistic attitudes still remained. At the end of WW2 many still held the view that Britain, and its Empire, could become the 'Third World Power' behind the U.S. ...read more.

At the same time as the establishment of the ECSC, European countries were also considering the establishment of an integrated, multi-national European Army responsible to a European Organisation, as first put forward under the Plevin plan in October 1950. Britain's initial reaction, exemplified by Bevin and Attlee, was to dismiss this plan, at least until the U.S. showed its full support for it and for German rearmament. Even then, constant bickering between France and Britain resulted, often about the need to make firm commitments regarding the exact deployment of troops. It was only when Germany was admitted to NATO that progress finally occurred as British worries over the creation of a supranational European organisation dissipated and the British could maintain its foot in two camps, Europe and the US. With progress occurring on many fronts (e.g. ECSC, NATO) it was not long before European countries were looking for more general economic and political integration. Such integration, provided it included Germany, would give others such as France access to the biggest and fastest growing economy. ...read more.

was pressurising Britain into joining. Essentially the main reason was that EEC was performing well and Britain's EFTA was performing poorly. But the application was turned down by De Gaulle who, ironically, used Britain's concerns over supranationality as an excuse for his refusal even though France, itself, preferred inter-governmental co-operation between sovereign states as a basis for the continuing operation of the EEC. The 1960's showed Britain continuing its effort to join the EEC, without success. Initially its Commonwealth links could be used by France as a reason for refusing EEC membership as these economic links might potentially undermine France's determination to maintain a highly subsidized Common Agricultural Policy. Unfortunately, Britain's reliance on US Polaris submarine capabilities, its inability to generate sufficient resources to pay for expensive military equipment (e.g. Blue Streak), or to act independently in a military capacity (e.g. Suez Crisis) but particularly its recognition that the world was passing it by as new political and economic alliances were being forged, meant that EEC membership applications had to continue even if national pride was damaged by each refusal. The Britain of the 1960's had fallen behind European countries because of its refusal to lay down old concepts and start afresh. Ian Chandler ...read more.