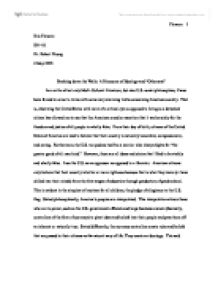 Breaking down the Walls: A Discourse of Ideology and &quot;Otherness&quot;

Eric Flowers EN 411 Dr. Robert Young 6 May 2005 Breaking down the Walls: A Discourse of Ideology and "Otherness" As a critic of not only Multi-Cultural Literature, but also U.S. social philosophies, I have been forced to come to terms with some very alarming truths concerning American society. That is, observing the United States with more of a critical eye as opposed to living as a detached citizen has allowed me to see that the American creed or assertion that it works solely for the freedom and justice of all people is wholly false. From their day of birth, citizens of the United States of America are lead to believe that their country is naturally honorable, compassionate, and caring. Furthermore, the U.S. too pushes itself as a warrior who always fights for "the greater good of all man kind." However, these are all ideas and claims that I find to be visibly and wholly false. I see the U.S. as an oppressor as opposed to a liberator. American citizens only believe that their country is better or more righteous because that is what they learn (or have drilled into their minds) from the first stages of education through graduation of grade school. This is evident in the simplest of routines for all children, the pledge of allegiance to the U.S. flag. Stated philosophically, America's peoples are interpolated. This interpolation allows those who are in power, such as the U.S. government officials and large business owners (basically, controllers of the flow of currency) to plant ideas and beliefs into their people and pass them off as inherent or naturally true. Stated differently, the currency controllers create rules and beliefs that are passed to their citizens as the natural way of life. They create an ideology. This said ideology pushes the U.S. people to mentally and emotionally separate themselves from the members of other countries. ...read more.

This thus proves to be problematic because the ideas, assertions, and/or opinions of those on the outside tend to be skewed or wholly false. Like the three aforementioned critics I too fully agree and assert that studies of the "other" are incomplete as they leave out the attitudes and beliefs of the "other." I too emphasize my belief that Post Modern studies would be strengthened if all who encompassed "otherness" became more than a source of study or critique, but were too allowed to assert their own ideas and attitudes. Mohanty engages gender with regards to western perceptions. In her essay, "Under Western Eyes: Feminist Scholarship and Colonial Discourses," Mohanty aims to break down the western perceptions of third world women as. Mohanty challenges her readers to see that the ways women of third world countries are viewed are merely constructions of outside cultures as opposed to realities. She asserts that all ideas and critiques of the third world woman are merely constructions used to create certain political and ideological feelings towards the woman's country. This is outright stated as Mohanty says, "For feminist scholarship, like most other kinds of scholarship, does not comprise merely objective knowledge about a certain subject. It is also a directly political and discursive practice insofar as it is purposeful and ideological," (Mohanty 192). This same assertion is restated a few pages later as Mohanty says, "What binds women together is a sociological notion of the sameness of their oppression," (Mohanty 200). These are assertions and beliefs that I fully agree with. Like Mohanty, I see the west as a place that situates labels on third world women. I too see these labels as a means of defining not just the women themselves, but an entire country or region. These markers then prove to be problematic as they are used to create specific ideological constructions for those whom are on the outside looking in. ...read more.

As I stated before, this grouping is not fully unnecessary. It creates tidiness. However, the danger behind this grouping will only fall when people acknowledge that it is too possible for those who are outside of the realm of "otherness" to understand and embrace the "other's" subject matter. Section 3: Tearing Down the Walls of "Truth" Richard Wright's attack of ideology proves how America's culture shapes exact roles for people to live by. Like Wright, I see these constructions as dangerous as they lead to the belief that there are clear biological differences between people. It creates "otherness." For Mahonty, hooks, and Henderson "otherness" is a dangerous construction that enables the majority to place social rank among different peoples and groups. Furthermore, each critic argues that all "others" should be given the chance to voice their own opinions with regards to their identity. Each critic also strongly asserts that "otherness" should not place boundaries or labels (whether they be positive or negative). Instead, "otherness" should be merely seen as a means of embracing and understanding someone or something different. These are all assertions that I fully agree with. Until the "other," which is created by ideology, is no longer seen as an inferior being, their will be a severe lack of understanding between different people and groups. I strongly assert that ideologies and "otherness" should as dangerous constructions that should be assailed by any and all citizens. They each hinder people from experiencing and appreciating ideas, passions, themes, subjects, (and eternally on) that are wholly different from their own. This will not happen however, unless all those that encompass "otherness" (as I do myself being a black male) voice the known fact that the identities and labels that have been and will continue to be thrust upon them are iniquitous. Until then, those outside of "otherness" (mainly wealthy whites, and specifically affluent white males) will continue to subordinate, through ideology, all they see as different. ...read more.