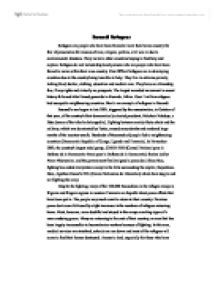 Burundi Refugees Refugees are people who have been forced to leave their home country for fear of persecution for reasons of race, religion, politics, civil war or due to environmental disasters. They move to other countries hoping to find help and asylum. Refugees do not include displaced persons who are people who have been forced to move within their own country. Over 80% of refugees are in developing countries due to the country being less able to help. They live in extreme poverty, lacking food, shelter, clothing, education and medical care. They have no citizenship, few, if any rights and virtually no prospects. The largest recorded movement in recent history followed tribal-based genocide in Rwanda, Africa. ...read more.

faction led by Pierre Nkurunziza, and the government finally signed a peace deal. Since then, fighting has ended everywhere except in the hills surrounding the capital, Bujumbura. Here, Agathon Rwasa's FNL (Forces Nationales de Liberation) rebels have dug in and are fighting the army. Despite the fighting, many of the 320,000 Burundians in the refugee camps in Kigoma and Kagera regions in western Tanzania are hopeful about peace efforts that have been put in. The people very much want to return to their country. Previous peace deals were followed by slight increases in the numbers of refugees returning home. Most, however, were doubtful and stayed in the camps awaiting signs of a more enduring peace. Many are returning to the east of their country, an area that has been largely inaccessible to humanitarian workers because of fighting. ...read more.

16 November 2003, they have heard on the radio or from people who have returned to Burundi, that security has improved in their country. Others appear to doubt that a firm peace can take hold quickly. Many were going back because of the improved security. There are still plenty of refugees, especially among the more educated, who are more reluctant to return home now. Humanitarian workers say that some are waiting for their children to complete the school year in the camps in June. There are no estimates for the numbers of refugees expected back in Burundi this year, but UNHCR's planning figures are 130,000 for this year, 135,000 for 2005 and the rest in 2006. At present, most of the returnees are leaving the camps in Kibondo District. Each week approximately 500 refugees return to Burundi. ...read more.