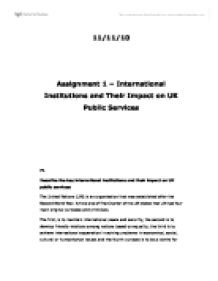 Describe the key international institutions and their impact on UK public services:

11/11/10 Assignment 1 - International Institutions and Their Impact on UK Public Services P1 Describe the key international institutions and their impact on UK public services: The United Nations (UN) is an organisation that was established after the Second World War. Article one of The Charter of the UN states that UN has four main original purposes and principals. The first, is to maintain international peace and security, the second is to develop friendly relations among nations based on equality, the third is to achieve international cooperation in solving problems in economical, social, cultural or humanitarian issues and the fourth purpose is to be a centre for harmonizing the actions of nations in accordance with the above stated purposes and principles (1948). The United Nations is an international organization made up of international institutions. UN includes their own Central system and specialized agencies. The World War II took place in 1945 and after the war finished the UN was founded to replace the League of Nations to provide a platform for dialogue and to stop wars happening between countries. ...read more.

The European Parliament, which represents the people, shares legislative and budgetary power with the Council of the European Union. The European Commission, which represents the common interest of the EU, is the main executive body. It has the right to propose legislation and ensures that EU policies are properly implemented. The European Union is more than just a confederation of countries, but it is not a federal state. It is, in fact, a new type of structure that does not fall into any traditional legal category. Its political system is historically unique and has been constantly evolving over more than 50 years. As you would expect, Europe must work together on a variety of issues and the decisions made at EU level can have a great impact on UK public services. E.g. the situation in Kosovo in the mid 1990s highlighted the importance of a rapid reaction force to target trouble spots in Europe. http://europa.eu/abc/12lessons/index_en.htm The North Atlantic Treaty Organization (NATO) ...read more.

http://www.nato.int/cps/en/SID-27AEBB38-BD18634A/natolive/organisation.htm http://en.wikipedia.org/wiki/NATO The European Court of Human Rights was started in 1959, based on principles set out in the European Convention on Human Rights. It is based in Strasbourg and considers cases initiated by organisations, states and individuals against any country which has signed up to the convention; namely, most of the European Nations. It is run by the Council of Europe; the human rights body. Any country that has a decision against it must comply with the ruling of the Court, although the Court itself cannot enforce anything. Essentially the Country is bound by the fact that it is a member of the European Union. The Convention was adopted under the auspices of the Council of Europe, all 47 of whose member states are parties to the Convention. The European Court of Human Right has an impact on the public services and this was shown by when the ECHR decided in 1999 that the armed services ban on homosexuals serving in the forces was illegal and now the armed services now have no ban on homosexuality. (More can be read upon the public services book 1 on page 281) http://www.abouthumanrights.co.uk/european-court-human-rights.html http://en.wikipedia.org/wiki/European_Court_of_Human_Rights ...read more.

3 Stars - In places there is a narrative clarity about this assignment; the main international institutions - their aims and functions, are explained very competently. Some paragraphs directly refer to, and answer, the set question - but in other paragraphs the focus is somewhat more implicit.
From the perspective of essay technique, the lack of a conclusion dilutes the power of argument in the essay - there is no summary or final answer. Although the international institutions were well defined, the notion of public services was less well established and was narrowly focused on the armed forces. The use of references was not clear, and there should be a broader range of sources used at A-Level than just websites like wikipedia.