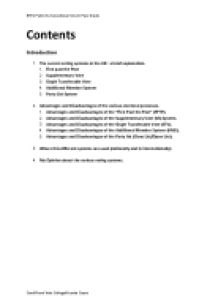 Different Types of Electoral System and the UK.

1. Party List System When using this system voters vote for a party in a multimember constituency and each party receives the seats in the same proportion as the vote sit won from the that constituency. The parties determine the ranking from their list of candidates; the voter has nothing to say about this because when they vote they vote for a political party, not individuals. 1. Advantages and Disadvantages of the various electoral processes. 1. Advantages and Disadvantages of the ?First Past the Post? (FPTP). Advantages Disadvantages 1. Easy and simple to use. Counting of the ballot papers is fast and accurate. 1. Individuals may cast negative votes: voting against a candidate that is disliked instead of voting for someone who the voters my like. 1. Ballot papers easy to understand 1. Lack of choice of representatives, usually 3 or 4 will try and be elected and if a voter feels he doesn?t like them he may feel he doesn?t have a choice. Provides a close and direct link between the MP and the constituency. 1. Voters in clearly political oriented constituencies may feel their vote is useless if they do not share the same political views as the majority of the rest of the constituency. This affects badly the smallest parties. ...read more.

1. Advantages and Disadvantages of the Party list (Close List/Open List). Advantages Disadvantages 1. Guarantees a high degree of a party proportionality. 1. Party lists discriminate against those not willing to be part of a political party and therefore it is almost impossible to stand as an independent candidate. 1. Every vote has equal value. 1. Close party lists are completely impersonal, weakening any link between the person who is elected and the area that elected him. 1. Open list offer voters more choice and control of who is elected. 1. As the candidates are selected by their party leaders which will put the popular candidates ate the top of the list and this may not represent the electors? choice. 1. Closed lists have more chances to have members of different gender and from minorities. ________________ 1. Where this systems are used FPTP Supplementary Vote (VS) System Single Transferable Vote (STV) Additional Member System (AMS) Party list (Close List/Open List). Election for the House of Commons English mayors (e.g. Mayor of London) All elections in the Republic of Ireland, except elections for the presidency and by-elections which are both conducted using the Alternative Vote. The Scottish Parliament; The Welsh Assembly British elections to the European Parliament (excluding Northern Ireland) Police and crime commissioners in England and Wales Many UK student unions the Church of England and many other private organisations. The Greater London Assembly Local elections in Scotland, from 2007 Cardiff and Vale CollegeRicardo Cassis ...read more.