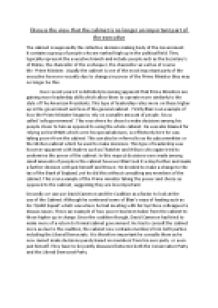 Discuss the view that the cabinet is no longer an important part of the executive.

﻿Discuss the view that the cabinet is no longer an important part of the executive The cabinet is supposedly the collective decision making body of the Government. It contains a group of people who are ranked high up in the political field. They typically represent the executive branch and include people such as the Secretary?s of States, the chancellor of the exchequer, the chancellor as well as of course the Prime Minister. Usually the cabinet is one of the most important parts of the executive however recently due to changes in power of the Prime Minister they may no longer be this. ...read more.

This was where he chose to make decisions among his people closer to him as opposed to using the whole cabinet. He was also blamed for relying on his SPADS which were his special advisors, so effectively here he was taking power from the cabinet. This can also be referred to as his subcommittee or the kitchen cabinet which he used to make decisions. This type of leadership was however apparent with leaders such as Thatcher and Wilson who again tried to undermine the power of the cabinet. In this respect decisions were made among small amounts of people in the cabinet however Blair took it a step further and made a further decision with just himself and Brown. ...read more.

Although he continued some of Blair?s ways of leading such as his ?QUAD Squad? which was where he had meeting with his top three colleagues to discuss issues. This is an example of how power has been taken from the cabinet to those higher up in charge. Since the coalition though, David Cameron had tried to make more of a return to formal cabinet government. He has to consult the cabinet more as due to the coalition, the cabinet now contains members from both parties including the Liberal Democrats. It is therefore important he consults them as he now cannot make decisions purely based on members from his own party or even just himself. They have to be jointly discussed between both the Conservative Party and the Liberal Democrat Party. ...read more.

2 Stars - This has the makings of a good essay as it contains elements of comparison and evaluation, but structurally it lacks a sense of balance, in terms of considering a wider range of evidence and perspectives, and also it lacks a final conclusion that directly addresses the question.