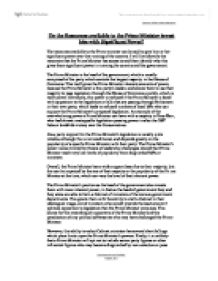 Do the resources available to the prime Minister invest him with significant power?

Prime Minister in a leadership contest and claim office due to their high standing in the Party; the Prime Minister would rather keep these potential loose cannons on side to ensure they are not presented with serious leadership issues later on. This can be shown in the Labour leadership contest of 1994, where Gordon Brown conceded defeat to Tony Blair on the condition of a senior Cabinet position in any resulting government and the leadership crown should Blair resign. Also, the Labour party has been limited to being forced to pick its first Cabinet after a period in opposition from its Shadow Cabinet after re-election, which places limits on the choice the Prime Minister can make; the Conservatives are free to choose Cabinet Ministers as they please whenever they please. The Prime Minister also has power in that they can choose to dismiss cabinet ministers, which grants them power as they can choose to dispense with the services of disloyal or underperforming minsters, who may be rebelling against the Prime Minister's personal or political issues or may be ineffective in running their department as the Prime Minister may want. ...read more.