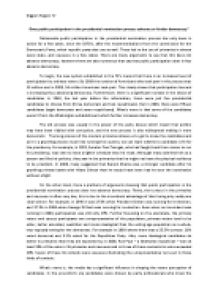 Does public participation in the presidential nomination process advance or hinder democracy?

﻿Diggers Rogers ?G? Does public participation in the presidential nomination process advance or hinder democracy? Nationwide public participation in the presidential nomination process has only been in action for a few years, since the 1970?s, after the recommendations from the commission for the Democratic Party, which republic party also use as well. These led to the use of primaries in almost every state, and caucuses in a few states. There are many arguments to say that this does not advance democracy, however there are also numerous that say that public participation does in fact advance democracy. To begin, the new system established in the 70?s means that there is an increased level of participation by ordinary voters. By 1988 the number of Americans who took part in this process was 35 million and in 2008, 54 million Americans took part. This clearly shows that participation has and is increasing thus advancing democracy. ...read more.

For example, in 1996 it was 17.5% when President Clinton was running for re-election, and 17.2% in 2004 when George W Bush was running for re-election. Even when no incumbent was running in 2000; participation was still only 19%. Further focussing on the electorate, the primary voters and caucus participants are unrepresentative of the population; primary voters tend to be older, better educated, wealthier and more ideological than the voting age population as a whole, thus typically voting for the democrats. For example in 1988 where there was a 25.5% turnout: 16% voted democrat and 9.1% voted for the Republican Party. Also, more ideological candidates do better in primaries than they are expected to; in 2008, Ron Paul ? a libertarian republican ? won at least 10% of the vote in 14 primaries and caucuses and in three of those contests his vote exceeded 20%. Seven of these 14 contests were caucuses illustrating the unrepresentative turn-out in those kinds of contests. ...read more.

Finally, the early states especially Iowa and New Hampshire have disproportionate influence. The Iowa caucuses are noteworthy for the amount of media attention they receive during U.S. presidential election years. Since 1972, the Iowa caucuses have been the first major electoral event of the nominating process for President of the United States. Although only about 1% of the nation's delegates are chosen by the Iowa State Convention (25 Republican delegates in 2012, assigned proportionately), the Iowa caucuses have served as an early indication of which candidates for president might win the nomination of their political party at that party's national convention, and which ones could drop out for lack of support. In conclusion, since the change of the system since 1968 i believe that the system has become far more democratic, however I believe that there are still many flaws in the current system that if corrected could make the candidate selection process more efficient, interesting and most importantly it could further advance democracy. ...read more.