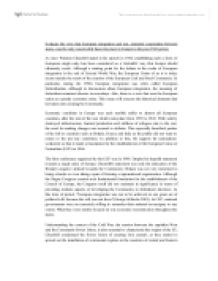 Evaluate the view thatEuropean integration and not, extended cooperation between states, was the onlyconceivable basis for peace in Europe in the post 1945 period.

Evaluate the view that European integration and not, extended cooperation between states, was the only conceivable basis for peace in Europe in the post 1945 period. As once Winston Churchill stated in his speech in 1946, establishing such a form of European single unity has been considered as a 'desirable' way that Europe should ultimately reach. Although a starting point for the debate in the realm of European integration is the end of Second World War, the European Union of as it is today seems mainly the result of the creation of the European Coal and Steel Community. In particular, during the 1950s European integration was often called European federalization, although in discussions about European integration, the meaning of federalism remained obscure in nowadays. Also, there is a view that sees the European union as a purely economic unity. This essay will concern the historical elements that led states into creating the Community. Economic condition in Europe was such terrible suffer to almost all European countries, after the end of the war which took place from 1939 to 1945. With widely destroyed infrastructure, harmed production and millions of refugees due to the war, the need for making changes was seemed to definite. This especially benefited parties of the left in countries such as Britain, France and Italy as the public did not want to return to the pre-war conditions. In addition to this, the support for nationalism weakened so that it made a foundation for the establishment of the European Union of Federalists (EUF) ...read more.

Pinder 2002). After the twelve years of ruling of n**i in German which eventually ended with devastation in 1945, the Community intended to become one of the world's power again. Indeed, the idea of equality was what made the Communists attractive. However, Schuman declared that the new Community would be "the first concrete foundation of a European federation which is indispensable to the preservation of peace." (J. Pinder 2002). Therefore, it is important to note that the political ruling class in German, the group of politicians who were thoroughly engaged with the concept of federal democracy, has quite constantly supported such a development, whereas the commitment made by French was to develop the Community in a 'federal' direction. Indeed, an amendment to the Basic Law of the reunited Germany provided for its participation in the European Union committed to federal principles in 1992 (J. Pinder 2002). Moreover, there were other four founder states including Belgium, Italy, Luxembourg, and the Netherlands. They also viewed the new European Community as a means of ensuring the creation of peace, by binding Germany within those strong European institutions. Like the Germans they saw the Community as a stage in the development of a federal polity. Although the memory of World War Two is retreating into the more distanted past, the motives toward the complete peace and security, which was thought to be fundamental to the foundation of the formation of the Community, still remains a powerful influence on governments and politicians in the those founder ...read more.

Hence, successive British governments sought entry into the Community in 1973. However, while the British took a leading part in developing the common market into a more complete single market, they continued to lack the political motives that have driven the founder states, as well as some others, to press towards other forms of deeper integration. Since the end of the Second World War, Europe has evolved through various forms. The suspicions and hostilities were the main concerns that the most of European states were faced with. The United States and the Soviet Union were vacuuming the military and economic power from Western Europe so that they began to from a single unity of Europe by integrating their coal and steel industries, which have eventually given the firm foundation for the European Union as it appears today. The motives of integration were to provide stability within the area in the post-war period. Economic and political reconstruction also took place. After several years of development, the establishment of the single market is almost completed. Even though with the existence of current concerns such as the limitations on the constitution and the approval of the enlargement or undermining the national sovereignty within the Community, The European Union plays an significant role as powerful supranational organization in the international system. It is fair to state that the original motives of achieving the peace and stability within 'single' Europe, has been accomplished. ...read more.