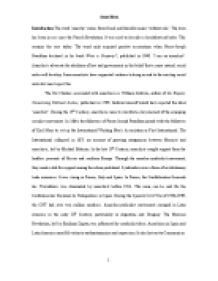 Examine the history of and different types of Anarchism

Transfer-Encoding: chunked ﻿Anarchism Introduction The word ?anarchy? comes from Greek and literally means ?without rule?. The term has been in use since the French Revolution. It was used to describe a breakdown of order. This remains the case today. The word only acquired positive associations when Pierre-Joseph Proudhon declared in his book What is Property?, published in 1840: ?I am an anarchist?. Anarchists advocate the abolition of law and government in the belief that a more natural social order will develop. Some anarchists have supported violence to bring an end to the existing social order but most reject this. The first thinker associated with anarchism is William Godwin, author of An Enquiry Concerning Political Justice, published in 1793. Godwin himself would have rejected the label ?anarchist?. During the 19th Century, anarchism came to constitute a key element of the emerging socialist movement. In 1864, the followers of Pierre-Joseph Proudhon joined with the followers of Karl Marx to set up the International Working Men?s Association or First International. The International collapsed in 1871 on account of growing antagonism between Marxists and anarchists, led by Michael Bakunin. In the late 19th Century, anarchists sought support from the landless peasants of Russia and southern Europe. Through the anarcho-syndicalist movement, they made a bid for support among the urban proletariat. Syndicalism was a form of revolutionary trade unionism. ...read more.

The same might be said for the Populists in Tsarist Russia, and for Zapata in Mexico. At this time, anarchists carried out assassinations. Prominent victims were Tsar Alexander II, assassinated in 1881 by a group known as ?The People?s Will?. King Humbert of Italy and Empress Elizabeth of Austria were also assassinated, as was President Carnot of France and President McKinley of the United States. Anarchist violence resurfaced in the 1970s with the activities of Baader-Meinhof in West Germany, the Red Brigades in Italy, the Red Army in Japan and the Angry Brigade in Britain. Anarchists see violence as an acceptable form of retaliation against political oppression. In Italy, the Red Brigades set up ?people?s courts? and held ?proletarian trials? before assassinating their victims. Violence is also seen as a way of demoralising the ruling classes and raising the political consciousness of the masses. In practice, political violence has tended to provoke public horror and outrage and states have responded by extending their repressive machinery, usually with public support. Direct action This is employed by the modern anti-globalisation or anti-corporate movement. An example of direct action is the protest camp outside St. Paul?s Cathedral in London in 2011 and 2012. Anarchism in the 21st Century Anarchism has had a powerful influence on both the Right and the Left in recent decades and has made a powerful stand in its own right on such contemporary issues as pollution, environmental destruction, consumerism, urban development, gender relations and global poverty, which largely cut across the conventional political divide. ...read more.