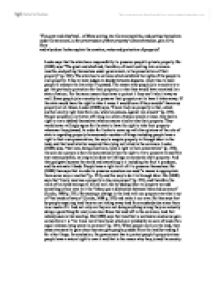 How and why does Locke explain the creation, value and protection of property?

'The great and chief end... of Mens uniting into Commonwealths, and putting themselves under Government, is the preservation of their property' (Second treatise, para.124). How and why does Locke explain the creation, value and protection of property? Locke says that the state has a responsibility to preserve people's private property. He (1688) says "The great and chief end, therefore, of men's uniting into common-wealths, and putting themselves under government, is the preservation of their property" (p. 262). The state has to set laws which establish the rights of the people to own property. It has to have judges to decide between disputes. And it has to have people to execute the law once it's passed. The reason why people join a society is to get this particular protection for their property, or else they would have remained in a state of nature. For the same reason they have to protect it they can't take it away as well. Since people join a society to preserve their property not to have it taken away. If the state would have the right to take it away it would be as if they wouldn't have any property at all. Since, Locke (1688) says, "I have truly no property in that, which another can by right take from me, when he pleases, against my consent" (p. 266). People would be a lot better off living in a state of nature where at least, they have a right to try to defend themselves when someone tried to take their property. They would never willingly agree for the state to have the right to take their property whenever they pleased. In order for Locke to come up with his opinions of the role of state in regarding property he assumed a number of things including people have a right to their own preservation, the way to acquire property is through labor in the land, and that land is better acquired than lying not toiled in the common. Locke (1688) ...read more.

I cannot arrive at how he would react to this. On one hand, Locke may approve of this because some amount of work is still involved: investors must research their moves, as well as work to make the money in the first place. On the other hand, Locke may disdain this because making money from money seems to go away from the way God intended the gift of the earth's resources to be. When one tries to decide whether Locke was misguided in trying to account for all the legitimate functions of government in terms of "the preservation of property", it is important to qualify the statement by deciding what exactly Locke meant as property in the first place. Locke states that "every Man has a property in his own Persons", this is a difficult notion to grasp given our own modern definition of property. Our "persons" are certainly not a property in the sense of being something we could see to someone else, and the right to trade away or alienate something is certainly a major part of the modern meaning of the notion of property. However, the word 'property' in the seventeenth century was often used more widely to denote any rights of a fundamental kind, and fundamental rights were often claimed to be inalienable. For Locke therefore, human beings are primarily centres of rights and duties (rather than, as with Hobbes, centres of appetites). The right and duty or 'property' of humanity requires, first and foremost, our survival. However, Locke is also at pains to state that once "our own Preservation comes not into competition, ought he, as much as he can, to preserve the rest of Mankind." The extent to which I may exercise my political liberty to ensure my own survival therefore, is constrained to the ability to which you may exercise yours. Locke proposes that one must derive our political power as this is the "state of perfect freedom to order their actions and dispose of their possessions and persons as they think fit within the bounds of the law of nature." ...read more.

Even the soveriegn has no right to interfere with or take away a man's property. This is the true limit of any man or governing body. Locke favored a limited monarchy. This is an elected legislative assembly and a monarch that have the power to direct the commonwealth to preserve the community and it's members and their rights. Locke believed that people were the absolute sovereign, and that if the appointed sovereign abused his authority the people would have the right to dissolve the government. This right of the people reinforces the limitations of the sovereign, while enforcing the accountability of the sovereign. It is in this sense that the community or the aggregation of individuality, retains power over the sovereign and in essence limits it's power. This is the extent of the limitation of authority of the sovereign. The sovereign is a servant of the people, that has limited power only as long as the majority allows it to have power. It was Locke's intent that the state was made for the individual and that the sovereign be used as a protective instrument for the good of the individual. Locke's ideas of property are based on God given rights. Each person has been given a body, with certain abilities and potentials, to use by God. The use of this body is called labor and its product is called property. Since everyone has a body and a level of potential everyone is capable of producing property. The purpose of the sovereign is to protect the individuals right to property and their property. The sovereign is limited in it's power and authority and does not have the right to take or interfere with any man's property, since to do so would be an interference with the right's of man as given by God. It was Locke's hope that with such an ideology behind a people and their government that they might attain and retain Locke's version of the good life, that is life, liberty, and most importantly estate. ...read more.