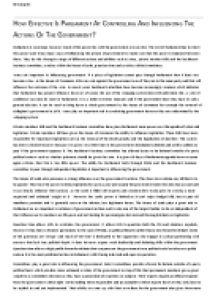 How Effective Is Parliament At Controlling And Influencing The Actions Of The Government?

﻿Ben Jacques ________________ How Effective Is Parliament At Controlling And Influencing The Actions Of The Government? Parliament is sovereign, however much of this power lies with the government or executive. The rest of Parliament has to check this power and it has many ways of influencing the actions of government to make sure that the power is balanced between them. They do this through a range of different actions and abilities such as votes, private member bills and the backbench business committee, scrutiny within the House of Lords, question time and scrutiny within Committees. Votes are important in influencing government. If a piece of legislation cannot pass through Parliament then it does not become a law. In the House of Commons MPs can vote against the government even if they are in the same party and that will influence the outcome of the vote. In recent years backbench rebellions have become increasingly common which indicates that Parliament has greater influence however of course the use of the whipping system does still undermine this. ...read more.

As the Lords is filled with experts and crossbenchers it also gives its scrutiny a more respected and unbiased weight to it. However the Lords power is limited as it can?t reject budget bills, has to pass all manifesto promises and is generally seen as the inferior, less legitimate house. The House of Lords plays a great role in Parliament as an important scrutiniser of government actions and is also one of the largest bodies to do so independent of their influence as its members are life peers and not looking for personal gain but real and thorough debate on legislation. Question time allows MPs to scrutinise the government. It allows MPs to question both the PM and ministers regularly. However it has been criticised, particularly in the case of PMQs, as political theatre rather than a true forum for debate. Some of the questions are ?setups? and much of the time is dedicated to the opposition who engage in cyclical questioning with answers that lack true political depth. ...read more.

Committees do possess great power however it is limited by a number of factors. Committees are poorly funded and have limited attendance. They also have a majority of government members preventing too intense scrutiny. Committees play a great role behind the scenes of party politics in independently and thoroughly scrutinising government actions. In conclusion the government?s actions are influenced by intense scrutiny of their peers within Parliament however the balance of power between both the government and Parliament is fine as both use all options at their disposal to influence the other. At first sight it may seem as if the government?s use of the whipping system undermines any Parliament influence however Parliament can exert much less obvious pressures in the form of the House of Lords, PMBs and the backbench business committee, question time and committees. I think the most important of these is House of Lords as it is almost completely independent of government authority and is complicit with many experts and committees as they can independently scrutinise the government to a much deeper level than other methods in Parliament and charge the government with a response to their findings. ...read more.