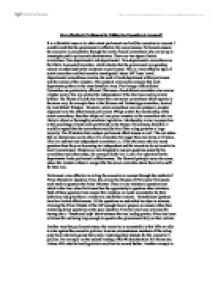 How effective is Parliament in Calling the Executive to Account?

How effective is Parliament in Calling the Executive to Account? It is a debatable issue as to what extent parliament can hold the executive to account. I could be said that the government is effective for many reasons. Parliament ensures the executive is accountable through the work of select committees who are set up to investigate public policy and administration. There are two types of select committees: Non-departmental and departmental. Non-departmental committees are the Public Accounts Committee, which checks that the government are spending money as authorised by the electorate or parliament. This is a very effective type of select committee and had recently investigated Labour MP Tessa Jowell. Departmental committees examine the work of each department within parliament and the actions of the minsters. This constant examination ensures that each department perform in the most beneficial way. The Foreign Affairs Select Committee are particularly efficient. Chairmen of each Select committee also receive a higher salary, this is to protect the independence if the chairman and to prevent bribery. The House of Lords also have their own select committees which operate in the same way, for example there is the Science and Technology committee, chaired by Lord Robert Winston. ...read more.

It has also been criticised for not being long enough to question the government fully on their actions. Another way that parliament ensure the executive is accountable is that MPs are able to vote against the executive policies. In some circumstances members of the ruling party have rebelled against their party, illustrating their distaste for the executive's policies. For example: on the second reading of the 90 day detention Bill thirty nine Labour MPs rebelled and legislation could not be moved further. Another example is of the Higher Education Act whereby it only passed by twenty eight voted despite Labour having a significant majority of 60 in the House of Commons. Nevertheless rebelling is rare as MPs could face punishments (such as no promotion) for rebelling. A vote of no confidence allows parliament to hold the executive tot account. If parliament feels the Prime Minster is not competent to carry out his role then a vote of no confidence can be instrumented. This ma mean the Prime Minister is voted out of their position, thus calling the Prime Minster to account for his or her actions. The last time this occurred was in 1979 when James Callaghan was voted out. ...read more.

For example, the House of Lords opposed the fox Hunting Bill, so government used the Parliament Act, and this legislation has now been passed despite the Lords opposition. The process of swampage also shows that parliament is not effective at holding the government to account. Swampage occurred with the Hose of Lords Act 1999 when the executive swamped the House of Lords with life peers to ensure the Act was passed. The power of swampage is powerful and has been used many times as a threat if the Lords do not conform to the executives' demands, for example in 1993 John major threatened swampage on the Lords. In conclusion it can be argued that Parliament is only effective when the government have a weak majority, if the majority is vast then they will have a higher proportion of MPs on each committee and the chance of legislation not be properly scrutinised is high. Since Labour came to power in 1997 they have only had two defeats and event hose defeats have been in the years where their majority is smaller than previous years. All the measure put into place by Parliament to hold the executive to account all have limitations that prevent them from being fully effective. ...read more.