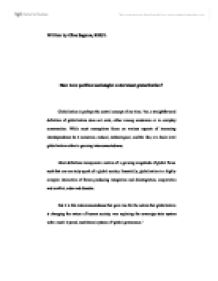 How have political sociologist understood globalization? Globalization is perhaps the central concept of our time. Yet, a straightforward definition of globalization

Written by Gino Seguna, RHUL How have political sociologist understood globalization? Globalization is perhaps the central concept of our time. Yet, a straightforward definition of globalization does not exist, either among academics or in everyday conversation. While most conceptions focus on various aspects of increasing interdependence be it economic, cultural, technological, and the like, at a basic level globalization refers to growing interconnectedness. Most definitions incorporate a notion of a growing magnitude of global flows such that one can truly speak of a global society. Essentially, globalization is a highly complex interaction of forces producing integration and disintegration, cooperation and conflict, order and disorder. But it is this interconnectedness that gave rise for the notion that globalization is changing the nature of human society, was replacing the sovereign state system with a multi-layered, multilateral system of 'global governance.' Regarding the nature of globalization, there is a discussion about whether the world has in fact entered a new, unique historical period. Some scholars certainly do discard the notion that we have entered a fundamentally new era. There are many, however, who see globalization as a genuine restructuring of social organization. Some have questioned how global present conditions really are. In the present era, many argue we have not witnessed an intensification of global interaction, but rather regional clustering of activity (G. Thompson 1998; Weiss 1998; Hirst and Thompson 1999). Furthermore, some have argued that the degree of economic interconnectedness exhibited today does not differ markedly from the period 1890-1914 (Jones 1995; Hirst 1997). Globalization has led many to explore the relationship these processes have to modernity (Harvey 1989; Giddens 1990; Beck 1992). ...read more.

World culture encompassed increasingly global conceptions of the correct kind of national society, thematization of individual rights and identities, inclusion of non-European societies in international relations, and greater formalization of ideas about humanity (1992: 59). Globalization in this period also included the growth of many other trans-national linkages and standards. A "struggle for hegemony" phase lasted from the 1920s until after World War II, giving way to a period of "uncertainty" since the 1960s. One particular ongoing debate within the theories of globalization is the prospects of democratic institutions at the global level. In his text 'Democracy and Globalization' David Held argues the case for what he calls "cosmopolitan democracy". While democracy has become the standard of political legitimacy internationally, Held argues that more and more nations favour democracy although its strength is being progressively limited by the results of globalization. For Held, Regionalism as well as globalization both undermines the notion of the nation state. In a cosmopolitan mode, David Held maintains that globalization requires the extension of liberal democratic institutions (including the rule of law and elected representative institutions) to the transnational level. (The World Bank, Poverty in Age of Globalization, http://www.worldbank.org/globalization, 19.05.2005) Nation state-based liberal democracy is inadequately equipped to deal with adverse side effects of present-day globalization such as ozone reduction or growing material inequality. According to this model, "local" or "national" matters should remain under the backing of existing liberal democratic institutions. Power is fundamental to Held's analysis of global transformation, as he regards it as being shifted more and more to multi-level dimensions. ...read more.

1997: 169). Their authority is rooted in a world culture: a set of universally applicable models that define who are legitimate actors in world society, what goals they can pursue and how they can pursue them. While world polity models define sovereign states as key actors, enabling authorities to construct collective goals and devise the means or programs to produce them, state officials are not the only ones engaged in such authoritative creation of value (1980: 112). The approach to world culture theory, advocated by Robertson, states that globalization is "the compression of the world and the intensification of consciousness of the world as a whole" (R. Robertson, Globalization, 1992: 8) This theory places emphasis on the way in which participants in the process become conscious of and give meaning to living in the world as a single place. Globalization therefore "refers both to the compression of the world and the intensification of consciousness of the world as a whole (Robertson 1992: 8). It involves the crystallization of four main mechanisms of the "global-human circumstance": societies (or nation-states), the system of societies, individuals (selves), and humankind; this takes the form of processes of, respectively, societalization, internationalization, individuation, and generalization of consciousness about humankind (Robertson 1991: 215-6; 1992: 27). Rather than referring to a multitude of historical processes, the concept above all captures "the form in terms of which the world has moved towards unicity" (1992: 175). This form is practically contested. Closely linked to the process of globalization is therefore the "problem of globality" or the cultural terms on which coexistence in a single place becomes possible (1992: 132). World culture denotes the multiple ways of defining the global situation, conceived as responses to this shared predicament. (http://www.sociology.emory.edu/globalization/theories03. ...read more.