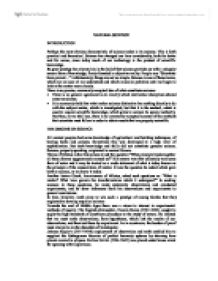 NATURAL SCIENCE INTRODUCTION Perhaps the most obvious characteristic of science today is its success. This is both practical and theoretical. Science has changed our lives considerably, both for better and for worse, since today much of our technology is the product of scientific knowledge. Its great prestige has always lain in the belief that science provides us with a uniquely secure form of knowledge, firmly founded in objective reality. People say: "Scientists have proved..." Unfortunately, things are not so simple. Science is one of those terms, which we are sure all we understand and which raises no problems until we begin to look at the matter more closely. There is no precise, commonly accepted idea of what constitutes science: * There is no general agreement as to exactly which intellectual disciplines should count as science. * It is commonly held that what makes science distinctive has nothing directly to do with the subject matter, which is investigated, but that it is the method, which is used to acquire scientific knowledge, which gives to science its special authority. But then, as we shall see, there is no commonly accepted account of the methods that scientists must follow in order to obtain results that are properly scientific. THE ORIGINS OF SCIENCE All ancient peoples had some knowledge of agricultural and building techniques, of healing herbs and poisons. ...read more.

Scientists have a worldview or paradigm. The paradigm of Newton's mechanical universe is very different to the paradigm of Einstein's relativistic universe; each paradigm is an interpretation of the world, rather than an objective explanation. According the T.Kuhn's analysis in The Structure of Scientific Revolution (1962), we can discern 5 stages in the model of scientific progress: 1. Pre-paradigm stage During this stage there are likely to be many rival schools, each with a different view of the phenomenon being studied. Some people might think the earth a disk, with balls of fire circling round it; others might think it a sphere, circled by things made of some different substance; yet others might think there holes in the sky, revealing a fire beyond (people have believed all these theories). 2. The establishment of a paradigm Eventually, one of the pre-paradigm schools (or perhaps some totally new theory) will become notably more successful than any of its rivals: it will succeed in explaining far more, or in making extremely successful predictions, and will attract adherents. 3. Normal science The scientific community sets about answering the questions, which are posed by the paradigm. In this stage the scientist does not do his research randomly, but holds a theory first and than makes observations. ...read more.

Feyerabend complains that defenders of science typically judge it to be superior to other forms of knowledge without adequately investigating those other forms. He observes that "critical rationalists" have examined science in great detail but their "attitude towards Marxism or astrology, or other traditional heresies is very different. Here the most superficial examination and most shoddy arguments are deemed sufficient". It cannot even be assumed, without further investigation, that a form of knowledge under investigation must conform to the rules of logic, as they are usually understood by contemporary philosophers and rationalists. SCIENCE AND PSEUDO-SCIENCE Any theory, which is in principle impossible to falsify, is not a scientific one. So if we explain certain events, say, by poltergeists, we may predict that these poltergeists behave in a certain way. If they then fail to behave in this way we should reject the theory as falsified or change the theory. So far this is good science. However, if we change it t o retain the poltergeists, but say, "they only appear when they want to", than this is pseudo-science, because now we cannot find any data which could falsify the theory. This is common indication of pseudo-science - any data will fit into theory. 1 Against Method: Outline of an Anarchistic Theory of Knowledge, London: New Left books, 1975, p.295-296. 2 "Realism and instrumentalism: Comments on the logic of Factual Support", in The Critical Approach to Science and Philosophy, ed. M.Bunge. New York: Free Press, 1964, p.305 2 ...read more.