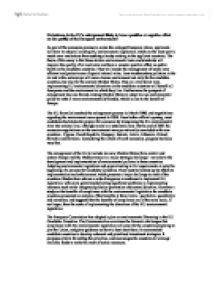 On balance, is the EU's enlargement likely to have a positive or negative effecton the quality of the European environment?

On balance, is the EU's enlargement likely to have a positive or negative effect on the quality of the European environment? As part of the accession process to create the enlarged European Union, applicants will have to adopt all existing EU environmental legislation, which on the most part is much more meticulous than anything already existing in the applicant countries. The thesis of this essay is that these stricter environmental rules and standards will improve the quality of air and water and have a massive positive effect on public health in the candidate countries. They will render the management of waste more efficient and protect areas of special natural value. Less transboundary pollution in the air and in the waterways will mean cleaner environment not only for the candidate countries, but also for the current Member States. Thus in a very direct way, implementing EU environmental directives in the candidate countries will benefit all Europeans and the environment in which they live. Furthermore the prospect of enlargement has also forced existing Member States to adapt its own environmental policy to make it more environmentally friendly, which is also to the benefit of Europe. The EU formally launched the enlargement process in March 1998, and negotiations regarding the environment were opened in 1999. Even before official opening, most candidates had started to prepare for accession by transposing the EU environmental laws into national law, although rarely in a systematic way. By the end of 2001 the accession negotiations on the environment were provisionally concluded with nine countries - Cyprus, Czech Republic, Hungary, Estonia, Latvia, Lithuania, Poland, Slovakia and Slovenia. ...read more.

The sixth Environmental Action Programme has been a major basis of the EU strategy for sustainable development. The sustainability strategy means that ecological issues will be given the same weight as social and economic issues when formulating polices for the future. Environmental aspects will be weighed into all proposals drawn up within the major policy areas of the EU. Every year, at the annual summit, the EU heads of state and government will follow up the course and progress of work on the strategy for sustainable development. The new sustainability strategy will concentrate on four themes: climate, transport, public health and natural resources. Therefore the prospect of European enlargement has forced the existing member states to formalise and agree on a universal environmental policy which will enable it to encourage an increased pro-environment policy in applicant countries. This is due to an increased awareness in the last fifteen years that because the environment is trans-boundary. Major disasters such as Chernobyl have made European countries realise that a good domestic environmental policy is not good enough if its neighbours do not follow a similarly good policy as environmental damage caused by one state will affect the environment of another. A prime example of this has been the case of acid rain in Scandinavia, where polluted wind from the UK and Western Europe has caused serious environmental problems for the people and the environment of Scandinavia. Planned EU enlargement has forced the present Member States to adapt their environment policy and improve its environmental record which will have a positive impact on the European environment. ...read more.

Andreas Beckmann, EU Accession Coordinator for the environmental organisation WWF has warned that "At the moment, we seem bent on encouraging, and even forcing, the accession countries to repeat our own past mistakes." (1) Beckmann argues that the way the structural and cohesion fund is being used in acceding countries will be incredibly damaging to the European environment. Beckmann argues that the EU is sponsoring a similar form of development in countries such as Poland and Hungary as they did in Greece and Spain which included massive road construction subsidized by the EU taxpayer and hugely damaging to the environment. Among the controversial and potentially environmentally damaging plans in acceding countries is a highway going straight through Poland's Biebrza National Park and the development of a canal linking the Danube with the Oder and Elbe rivers. In conclusion, the enlargement of the European Union will have a positive effect for both existing members and future members. For the first time in European history, the majority of Europe will work under one environmental policy which will be one of the strictest and most environmentally friendly policies the world has ever seen. This is not to say that massive improvements will be immediate or that mistakes won't be made in the lengthy process, however the greatest impact European enlargement will have on the environment is that the environment will rank as equally as important as economic and social policy across the European continent, which will force the environment to be treated properly and with the respect that it deserves which can only be of benefit to the people of Europe. FOOTNOTES All statistics are taken from http://europa.eu.int/index_en.htm (1) http://www.wwf.pl/0304151613_newsen. ...read more.